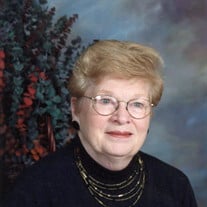 Adela M. Griffel, 97, of Fort Dodge, passed away Monday, January 25, 2021, at the Paula J. Baber Hospice Home. Services will be 10:30 a.m. Saturday, January 30, at the Gunderson Funeral Chapel with Pastor L.J. Hartley officiating. Interment will take place at a later date at Powhatan Township Cemetery near Plover. Memorials may be directed to Trinity United Methodist Church. Arrangements have been entrusted to Gunderson Funeral Home & Cremation Services. Adela is survived by her children, Lynette Peterson, Douglas (Carol) Griffel; Brian Griffel, as well as her many grandchildren, great grandchildren and great-great grandchildren; along with many nieces and nephews. She was preceded in death by her parents, her son-in-law John Peterson, and her brothers and sisters-in-law, Clayton and Altavene Jones and Warren and Lillian Jones. Adela Jones was born June 3, 1923, in Plover, Iowa, to Thomas R. and Irene (Phillips) Jones. She graduated from Plover Consolidated School in 1940, and then attended and graduated from Tobin Business School in Fort Dodge. Her first employer was Judge Cavanaugh in Webster County. She then went to Tucson, Ariz., and worked in the secretarial field at the Consolidated Vultee Aircraft Modification plant. When the plant closed after the end of World War II, she came back to Iowa and worked for Webster County Welfare until she married. In 1946, Adela married Herman Griffel and they lived on a farm near Albert City. They also farmed in the Plover area before they bought a farm and moved to the Vincent, Iowa area. During this time, Adela was employed with Fort Dodge Laboratories for 24 years, and was the first female supervisor at the company. She was divorced and moved to Fort Dodge where she lived until her death. In 2018, Adela sold her home and moved into Friendship Haven. After retirement, she was self-employed as she traveled the Midwest as a motivational speaker. She spent many winters in Mesa, Ariz., before finally settling in Fort Dodge. Adela had a zest for life and had many hobbies. She broadcast The Messenger for the IRIS blind reading program for 22 years, was a lay speaker for her church, volunteered in the RSVP program, and made meals for AIDS patients when that program was active. She loved a good game of cards and had a flower garden she shared with many friends. She made quilts for each member of her family, worked in the book store at the public library, and always had at least one good book going. Her church was very important part of her life as she taught and attended many devotional and education groups. She was a member of the International Toastmasters and was a professional after dinner speaker. Adela was a member of Trinity United Methodist Church, Federated Women’s Club, Fort Dodge Quilt Club, Federated Garden Club and Trinity Regional Card Club.

The family of Adela Griffel created this Life Tributes page to make it easy to share your memories.

Send flowers to the Griffel family.