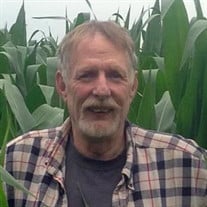 Alan Leroy Bradwell Sr., 63 of Knierim, died Tuesday, March 30, 2021, at the Paula J. Baber Hospice Home in Fort Dodge. Services will be 3:00 PM on Friday, April 2, 2021, at the Lighthouse Ministries in Fort Dodge. A time of gathering for family and friends will be from 2:00 PM to 3:00 PM on Friday at Lighthouse Ministries. Alan Leroy Bradwell, the son of John and Edna (Lower)Bradwell, was born June 28, 1957, in Fort Dodge. Alan went to Fort Dodge Schools and graduated from Fort Dodge Senior High in 1976. He worked for Isaacson Roofing in Fort Dodge and joined the Iowa Army National Guard in 1976. Alan served in the Iowa Guard for 8 years. On April 28, 1984, Alan married Becky Brundige. Two years later they moved their family to Hastings, Minnesota where Alan worked for the John A. Dalsin Roofing until an injury forced him to retire. Becky and Alan would later divorce. In 1994, Alan moved back to Iowa and made his home in Knierim. He would help some area farmers until his health prevented him from working any more. Alan loved the outdoors. Fishing, gardening, riding his Harley, watching drag racing, listening to music, and fixing things were some many things Alan loved to do. He will be known for his heart of Gold. Alan would welcome complete strangers into his home if they were in need. He would give his shirt off his back if you were in need. Alan is survived by his daughter, Jamie (Austin) Kakacek of Pocahontas, Iowa; sons, Alan (Angie) Bradwell Jr of Humboldt, Iowa and Jeremy (Lindsey) Brundige of Sullivan, Indiana. His grandchildren, Colin, Alayna, Ava and Alivia Kakacek and Chloe and Connor Brundige; his two sisters Susan Bailey and Nancy (Mike) Chardoulias both of Fort Dodge; and a dear friend, Carolyn Lyon. He is preceded in death by his parents, his five brothers, Jon, Brian, Mark, Steve, and Mike: also, his sister-in-law, Deb Bradwell-Hamlow.

Alan Leroy Bradwell Sr., 63 of Knierim, died Tuesday, March 30, 2021, at the Paula J. Baber Hospice Home in Fort Dodge. Services will be 3:00 PM on Friday, April 2, 2021, at the Lighthouse Ministries in Fort Dodge. A time of gathering for family... View Obituary & Service Information

The family of Alan Bradwell created this Life Tributes page to make it easy to share your memories.

Send flowers to the Bradwell family.