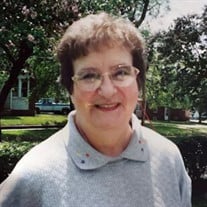 Not sure what to send?

Almary (Mary) Lela Bischoff Maschino, 92, of Fort Dodge, passed away on Wednesday, March 9, 2022, at the Paula J. Baber Hospice Home in Fort Dodge. A memorial service will be held on Thursday, June 2, 2022, at 11:00 AM, at Gunderson’s Funeral Home in Fort Dodge. Visitation will precede the memorial service on June 2, 2022 beginning at 10:00 AM. There will be a double burial following the service at Union Cemetery in Pomeroy, IA. for both Almary and her son Douglas Maschino. Almary Lela Bischoff was born October 7, 1929 in Pomeroy, Iowa to Fred and Della Bischoff. She attended rural school and graduated from Pomeroy Highschool in 1947. Upon graduation, she attended Buena Vista University in Storm Lake and began her teaching career in a one-room schoolhouse near Pomeroy. On September 11, 1948, Almary married Harold E. Maschino and they relocated to Fort Dodge, where she later worked for the Fort Dodge Public School system as a substitute teacher, fully retiring in 1999. Mary was an active member of Epworth United Methodist Church in Fort Dodge where she taught Sunday school, served as Sunday school superintendent, and served on Staff Parish. She enjoyed spending time visiting with family and neighbors, crocheting, reading, and traveling. She was preceded in death by her parents and siblings, her husband Harold Maschino, and her son Douglas Maschino. Almary is survived by her sons, Curt Maschino of Fort Dodge, Tom Maschino of Aventura, FL., and Nick and Melissa Maschino of Fort Dodge; one daughter, Amy Hagerman of Naperville, IL.; 9 grandchildren, and 9 great-grandchildren.

The family of Almary "Mary" Maschino created this Life Tributes page to make it easy to share your memories.