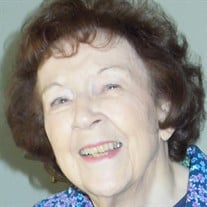 Arlene Campbell, 93, went to be with the Lord on Monday morning, October 7, 2019, at the Fort Dodge Villa Care Center. Arlene was born in Rockwell City Iowa to Lee and Fannie (Birkey) Zimmerman on November 2, 1925. A Celebration of Life will be 1:00 PM on Saturday, October 19, 2019, at the Gunderson Funeral Chapel with a cookie bar to the follow the service. Visitation will be from 12 noon until time of service on Saturday at the Gunderson Funeral Home and Cremation Services in Fort Dodge. Burial will be in the Otho Cemetery. On January 24, 1942, Arlene married William L. Campbell, and they resided in Fort Dodge and were married 58 years until his death in 2001. In earlier years Arlene faithfully volunteered at the Fort Dodge Villa Care Center and the downtown Clothes Closet in Fort Dodge. She remained active in her church, Winds of Fire, until her health began to fail. Arlene was a devoted mother to three daughters: Sherry Blair of Harcourt, IA, Dee Hughlette of Fort Dodge, IA and Rhonda (Ed) Simmons of West Des Moines, IA. She is survived by four sisters: Marilyn Decker of Twin Lakes, IA, Dolores Kutz of Lake City, IA, Shirley Jarvis of West Sacramento, CA and Janice McClue of Fresno, CA. She unconditionally loved her six grandchildren, Stacey (Rick) West of Harcourt, IA, Tim (Staci) Blair of Harcourt, Bill (Nicole) Baedke of Glenn Ellyn, IL, Ed (Amber Boesen) Simmons of Jacksonville, FL, Cindee Webster (Rick) Campbell of Waukee, IA and Tricia Kelly of Ankeny, IA; twelve great-grandchildren and three great-great-grandchildren. Anyone who walked through her door was welcomed with fresh coffee, homemade goodies and warm conversation. She loved the Lord and, while she was able, prayed daily for every member of her family. Arlene was preceded in death by her husband; mother and father; granddaughter, grandson-in-law, and great grandson, Kimberly, Steve, and Aaron Dorman; two brothers; one sister; and two son-in-law’s, Jim Blair and Dick Hughlette. In lieu of flowers donations can be made in Arlene’s name to Winds Of Fire Church located at 120 9th St NW in Fort Dodge or the Fort Dodge Salvation Army, 126 North 7th St. in Fort Dodge.

Arlene Campbell, 93, went to be with the Lord on Monday morning, October 7, 2019, at the Fort Dodge Villa Care Center. Arlene was born in Rockwell City Iowa to Lee and Fannie (Birkey) Zimmerman on November 2, 1925. A Celebration of Life will... View Obituary & Service Information

The family of Arlene Campbell created this Life Tributes page to make it easy to share your memories.

Arlene Campbell, 93, went to be with the Lord on Monday morning,...

Send flowers to the Campbell family.