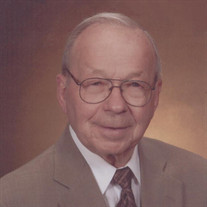 Arnie Clausen, 94, of Fort dodge, passed away peacefully on Sunday, September 26, 2021, at Paula J. Baber Hospice Home in Fort Dodge, Iowa. Arnold Clausen was born on February 25, 1927, at his Grandparents home in rural Webster County to Fern (Irene Lemon) Clausen and Victor Hans Clausen. Arnold attended school in Washington Township. He started high school in Duncombe, Iowa, but transferred to Fort Dodge during his Senior year of high school where he became active in the wrestling program. He pinned a Des Moines boy in 16 seconds. When Arnie turned 18 he enlisted in the United States Navy after the attack on Pearl Harbor. Bootcamp was at the U.S. Great Lakes Training Station. He was later assigned to a “Baby Flat Top”, the U.S.S. Copahee. They transported planes to Hawaii, the Philippines, Saipan, Guam, and Enewetak Atoll. The ship was decommissioned in 1945. Arnold attended Fort Dodge Junior College, and then transferred to University of Northern Iowa where he graduated with a B.A. Degree with focus on teaching industrial arts. He began his teaching career in Lake Park, Iowa, and then moved to South Junior High (Fair Oaks Middle School) in Fort Dodge where he taught for 39 years. Former students remembered him as efficient, respected... and also a teacher who allowed no shenanigans. After Arnie retired from teaching, he became a family counselor at Children and Families of Iowa, and then finished his career (at 93) as an employee at United Bank of Iowa. Arnie was active in Golden K Kiwanis, Camera Club, and he was a member of the 1 st Presbyterian Church for 59 years. He served as a Deacon and participated in many small groups over those years. Arnie also was recognized for his service as a participant on an “Honor Flight” for veterans to Washington, DC. In 1966, Arnie built a 2-story colonial style home for their expanding family, including building all of the custom walnut cabinetry for the kitchens and baths… and some stain glass windows. Arnie acted as the General Contractor, and “swung the hammer” for most of the construction. Arnie is survived by his wife Lillie Mae Clausen (59 years), 2 sons, Marc Clausen (Julie) Panora, IA, and David Clausen (Beverly Stachura) Carpentersville, IL, Son-in-law Paul Zierke Spirit Lake, IA, 4 granddaughters, Jennifer Hahn (Rob) San Bruno, CA, Dianna Beikert (Beau) Waverly, IA, Amy Arentson (Peter), Dardeen Prairie, MO, and Susan Elliott (Derek), Urbandale, IA, 9 Great Grandchildren, 2 nephews and 4 nieces. He was preceded in death by his daughter Mary Zierke, his sister Barbara Johnson, his parents, an infant brother, as well as grandparents, aunts, and uncles. Visitation will be held at Gunderson Funeral Home, 1615 N 15 th Street, Fort Dodge, IA this Friday, October 1 st from 5:00 - 7:00 p.m. Funeral services will be held at the 1 st Presbyterian Church, 1111 5 th Avenue N, Fort Dodge, IA this Saturday, October 2 nd at 10:30am. The family kindly requests masks to be worn. Livestream of the funeral service for Arnold Clausen will be on First Presbyterian YouTube https://www.youtube.com/c/fpcfortdodge or on their Facebook page https://www.facebook.com/First-Presbyterian-Church-Fort-Dodge-336484236392840/ Graveside services will be immediately following the funeral service at North Lawn Cemetery, with full military honors. The family will host a luncheon back at the church immediately following the graveside service. In lieu of flowers, please consider making a donation to Youth Shelter Care of North Central Iowa, Inc through Gunderson Funeral Home, 1615 North 15 th Street, Fort Dodge, IA. 50501.

The family of Arnold Clausen created this Life Tributes page to make it easy to share your memories.

Arnie Clausen, 94, of Fort dodge, passed away peacefully on Sunday,...