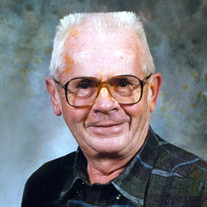 Arnold “Arnie” B. Danker, 84 of Fort Dodge, passed away Saturday, July 4, 2020, at Iowa Methodist Hospital in Des Moines, Iowa. Visitation will be held Friday, July 10, 2020, at Gunderson Funeral Home from 4-7 p.m. Services will be Saturday, July 11, 2020, at Gunderson Funeral Home at 10 a.m., with graveside services following. Arnold is survived by his wife of 51 years, Elaine; children: Darla McGinnis, Daryl (Melanie) Danker, Kristine (Douglas) Olsen, Brenda McWhorter and Carri Danker; 9 grandchildren; 8 great-grandchildren; and his buddies Casey and Chesney. He is preceded in death by his parents, Otto and Erna Danker; his grandparents Henry and Martha Thode; his infant daughter Tracy, son-in-law Rick McWhorter and grandson Steven Danker. Arnold was born September 3, 1935, in Keystone, Benton County, Iowa. He graduated from Lehigh in 1953. On June 28, 1958 he was united in marriage to Carol and they later divorced. On May 2, 1969, he married Elaine Dixon Holmes at Prince of Peace Church by Pastor Janke. He worked at Felco-Land O Lakes for 42 years, later working for Smitty’s Lawn Care for 20 years. He was a staple in the bowling community for 58 years. He received the Gene Bundy Award, 2007, 2008, 2012, 2013 and the Foster Funk Award 2011, 2012, was inducted in the local Hall of Fame, he was the secretary in numerous leagues, Junior Bowling coach, Men’s Board President. His high game was 262, high series 624, high average 169. Memorials may be left to the family’s discretion.

The family of Arnold "Arnie" Danker created this Life Tributes page to make it easy to share your memories.

Send flowers to the Danker family.