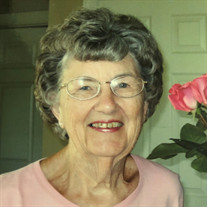 Betty Harris, 91, of Fort Dodge, Iowa, passed away Tuesday, July 7, 2020 at Willow Gardens Care Center in Marion, Iowa. In spite of her long-determined spirit, she lost her battle with Alzheimers. A celebration of life will be held at a later date. Burial will take place at Rose Hill Cemetery in Eagle Grove, Iowa. Arrangements have been entrusted to the Gunderson Funeral Home in Fort Dodge, Iowa. Thoughts, memories and condolences may be shared with them at: www.gundersonfuneralhome.com. Memorials may be directed to Mercy of Hospice in Cedar Rapids, Iowa. Betty was born July 7, 1929 in Eagle Grove, Iowa, the daughter of Jesse and Goldie Agard. She graduated Eagle Grove High School in 1947. She attended one year of community college. Her first job, was as a secretary for an insurance agent in Renwick, Iowa. It was in Renwick where she met her husband. On September 20, 1948 she was united in marriage to Duane (Phil) Harris. They shared 57 years of marriage. He later passed in 2005. After their marriage, they moved to Des Moines and Betty became a telephone operator. Upon completion of Phil’s training, they moved to Fort Dodge for his job with Goodyear. Betty experienced various jobs. Her proudest employment was as a nurse aide. She enjoyed her position in health care and comforting people. Betty’s hobbies were numerous; crossword puzzles and knitting mittens. She was also a savvy card player. She enjoyed summer and tended a small flower garden in the back yard. She also enjoyed watching wrens who faithfully built nests each spring in the hollow clothesline post. When weather was to her favor, she was known to go walking and visit her friends. Together, Betty and Phil enjoyed square dancing, camping, and fishing trips. Iowa winters became harder to endure as the years passed. “Selling it all“ and trying Texas was greatly debated. They had been long time residents in Fort Dodge, and the snowy season forced them to stay indoors far too long. Betty and Phil took the plunge and retired to McAllen Texas. They took up residence in Trophy Gardens Park and found what they were looking for: Fun and Sun. Betty suddenly added new hobbies. She continued her walking hobby and became a social butterfly. She took up golf, got a hole in one and laid up her clubs. She became a good cribbage player and experienced a perfect hand. She took up pool and belonged to Pool Hall Babes. She never missed Bingo or Saturday night dances. She discovered the hobby of stain glass. She collected angels. Betty was honored to serve as Queen of her Red Hats group in Trophy Garden. She collected Teddy Bears to donate to children in McAllen who were hospitalized. However, her claim to fame were her angel food cakes, she made for every potluck supper at Trophy Garden Park. Her second claim to fame was life as a “Winter Texan”. Trophy Garden had many “snowbird” residents representing many states, including Canada, and she welcomed each and every one. Betty led a very fulfilled and active life during her 91 years. She walked her earthly journey with much grace, beauty, kindness, strength and love. Betty made friends easily and enjoyed life. She always carried a smile on her face. Betty is survived by her daughter, Judy (Tom) Peek, their son Derek (Amanda), and daughter, Elizabeth (Jake) Worsham and Great Grandsons, Nathan and Everett. Betty’s nephews Denny (Kathy) Jergenson, Dick Jergensen, John (Sue) Jergenson and Randy Jergenson. Sister in law Kay Agard and daughter Deb. Sister in law Virginia Harris. Half-sister Mary Newsum. She was preceded in death by her parents, her husband Phil, brother Roger and his daughter Becky, a half-sister Helen Jergenson. Nieces and nephew Mardell (Jergenson) Jaskolski, Bonnie (Jergenson) Hill, and Ronnie Jergenson. The family would like to express their sincere appreciation to Willow Gardens Care Facility and Staff, and Mercy of Hospice. Thank you for your kindness, and dedicated care. You were the Angels she believed in. God bless all of you.

Betty Harris, 91, of Fort Dodge, Iowa, passed away Tuesday, July 7, 2020 at Willow Gardens Care Center in Marion, Iowa. In spite of her long-determined spirit, she lost her battle with Alzheimers. A celebration of life will be held at a later... View Obituary & Service Information

Send flowers to the Harris family.