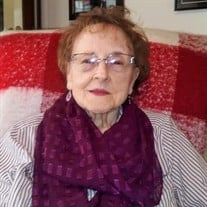 Betty L. McBride, 90, of Fort Dodge, was reunited with her husband in Heaven on May 5, 2021. Born in Chillicothe, Ohio, Betty and her husband Joe spent more than 66 years together in marriage. They made their home in Fort Dodge after Joe’s career in the United States Air Force. He passed away on Sept, 29, 2018, not long after their 66th wedding anniversary. She is survived by her five children: Pam (Greg), Steve, Deb Brown (Kenny), Joe, Jr. (Rachel) and John (Brenda). She leaves behind grandchildren Adam (Tanya), A.J., Andy (Mara), Zachary, Becca Archer (Micah), Nick (Cassy), Sadie, Ashley and Noah. She also had three great-grandchildren, Maddison, Renezmay and Haley. She is also survived by sisters Peggy Walker Nugent, Tucson, Ariz., Susie Walker Spencer, and Karen Walker McVey, Grove City, Ohio, brothers Jim (Sharon) Walker, Columbus, Ohio, and Gary (Susan) Walker, London, Ohio. She was also preceded in death by several other siblings, an infant daughter, and her father, William Robert Walker and mother Myrtle Lamb along with step-mother Leona Walker. Betty was born Sept, 17, 1930. She met Joe in 1952 and they were married on Sept. 20, 1952. Betty and Joe had several homes thanks to his service to the United States Air Force. They lived in Grove City, Ohio; Essex, England; Clovis, N.M.; Phoenix, Ariz.; and Ogden, Utah. He retired from the Air Force in 1971 and they made Fort Dodge their forever home. Betty first met Joe at a USO Function in Ohio. In a chance encounter, they both reached for the last of the cookies on a plate. She offered to share it with him and a romance blossomed. Betty made her “fabulous” peanut butter cookies for nearly eight decades. It was the favorite of her grandchildren. Betty had a handful of jobs while residing in Fort Dodge, but her favorite and the most important job to her was her role as Grandma Betty. Not only was she grandma to her grandchildren but she was grandma to countless others, including scores of children from Epworth United Methodist Church where she taught Sunday school and did the Children’s Message for years. A visitation will be held on Monday, May 10, from 5-7 p.m. at Gunderson Funeral Home in Fort Dodge. Funeral services will be held at Gunderson Funeral Home at 11 a.m. on Tuesday, May 11 with interment to follow at North Lawn Cemetery. Memorials may be left to the discretion of the family.

Betty L. McBride, 90, of Fort Dodge, was reunited with her husband in Heaven on May 5, 2021. Born in Chillicothe, Ohio, Betty and her husband Joe spent more than 66 years together in marriage. They made their home in Fort Dodge after Joe&#8217;s... View Obituary & Service Information

The family of Betty L. McBride created this Life Tributes page to make it easy to share your memories.

Betty L. McBride, 90, of Fort Dodge, was reunited with her husband...

Send flowers to the McBride family.