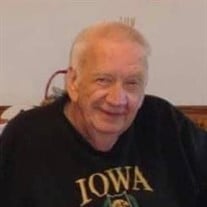 Billy Moore, 87, of Fort Dodge, passed away on Sunday, May 10, 2020 at the Fort Dodge Villa Care Center after a long battle with Alzheimer’s. A private service will be held at a later date. All guidelines from the IDPH will be followed by Gunderson Funeral Home and Cremation Services for visitations and services. The use of face masks are encouraged. Billy Gene Moore the adopted son of Walter and Emma (Beaman) Moore, was born on December 30, 1932 in Wapello, Iowa. He graduated from Fort Dodge High School in 1951 before serving two years in The United States Navy. Billy was stationed on the USS O'Brien during the Korean War. On June 6, 1960, Billy married Sandra Davison. The couple later divorced. He later married Janet Wilson on December 2, 1977, and they later divorced. Billy owned Moore’s Grocery Store in Fort Dodge and worked at Fort Dodge Group Home as an in-house care giver. Billy drove taxi in Fort Dodge for 17 years before retiring in December of 2007. Billy was a member of AA for 45 years. He loved his Chicago Cubs and playing cribbage. He also loved studying the Bible, using the computer and studying history. He is survived by four children, Diane (Tim) Cook of Sac City, Kirk (Lori) Moore of Otho, John (Becky) Moore of Green River, Wyoming and Tony (Diane) Moore of Fort Dodge; 15 grandchildren and 13 great grandchildren. He is also survived by a brother, Howard Calloway of Florida; half-sister, Bonnie Harris, MO and half-brother, Tom Harris of Muscatine, Iowa. Billy is preceded in death by his parents, his two sons, Christopher and Mike; a sister, Doris Bayer; half-brothers, John Watson and Joe McFeson and half-sisters, Ruth Hainey and Ila Mae Hainey.

Billy Moore, 87, of Fort Dodge, passed away on Sunday, May 10, 2020 at the Fort Dodge Villa Care Center after a long battle with Alzheimer&#8217;s. A private service will be held at a later date. All guidelines from the IDPH will be followed... View Obituary & Service Information

The family of Billy Gene Moore created this Life Tributes page to make it easy to share your memories.

Send flowers to the Moore family.