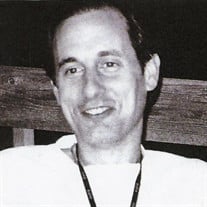 Bradley Douglas Brokaw, age 53, of Fort Dodge, died unexpectedly December 15, 2020. Brad was born to Jeri and Bill Brokaw Jr. on November 27, 1967 at Fort Dodge, Iowa. Brad was baptized in the Christian Faith and grew up in Fort Dodge, graduating from Fort Dodge Senior High School in 1986. He then attended the University of Northern Iowa prior to transferring to Iowa State University. At Iowa State Brad was a member of the TKE Fraternity, and graduated in 1990 with a degree in Business Finance. Following graduation, Brad made his home in Dallas, Texas for the next twelve years working in the field of finance. Upon returning to Iowa, Brad met Emma Fajardo and was joined in marriage in 2008. The couple made their home in Pomeroy, Iowa and were blessed with a son, Dylan. Later the family moved to Fort Dodge where they have made their home since. Brad is survived by his wife Emma, son Dylan, mother Jerita Brokaw of Clive, Iowa, sister Jane (Robert) Lutz, brother Bill (Susan) Brokaw III, five nieces and nephews all of Dallas, Texas. Preceding Brad in death are his father Bill Brokaw Jr., sister Nancy Brokaw and grandparents. Brad loved his boyhood years, living in the summer at Twin lakes where he could fish, water ski and learn to sail a Sunfish sailboat, then advancing with his father to the Sweet 16 sailboat. Memorials may be left to Saint Edmond Catholic School, Trinity Foundation of Trinity Regional Medical Center or the donor's choice. Due to Covid, a Private Service will be held for family members only. Gunderson Funeral Home & Cremations Services in charge of arrangements.

The family of Bradley Douglas Brokaw created this Life Tributes page to make it easy to share your memories.

Send flowers to the Brokaw family.