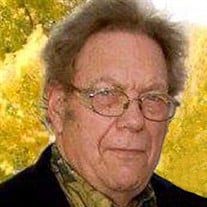 Carl John Anderson Jr., 78, of Fort Dodge, IA passed away at his home on October 15, 2021. Memorial visitation will be held 1:00 p.m. Friday with a memorial service to follow at 2:00 p.m. Friday, October 22, 2021 at Gunderson Funeral Chapel. Carl was born July 9, 1943, the son of Carl Sr. and Viola (Leist) Anderson, in Fort Dodge, Iowa. He attended Fort Dodge schools and graduated from Fort Dodge Senior High in 1961. He was enlisted in the Army National Guard starting at age 17 and was in it for 8 1/2 years, serving as an expert marksman and cook. He was united in marriage to Charlene Ritze on Nov. 3, 1979. To this union they had two daughters, Carlelene and Christina. He was employed for the telephone company, delivered oil for Sieg's, did grounds work at Friendship Haven and worked at Celotex, and later BPB for 32 years, retiring in 2004. He also owned several rental houses over the years, where him and his wife and later kids, did all the maintenance repairs, mowing, shoveling and any other yard work needed. He loved remodeling work and did a lot of remodeling in his own home. He was an avid hunter and fisherman. He loved to go camping and target shooting with his kids and grandkids. He also loved to trap, work with wood and leather. Collecting coins and stamps, and several antiques, he also loved to go to auctions and to trout fish. He was a nature lover, always planting trees, bushes, plant and flowers to help wildlife. Survivors include daughters Carlelene (Domingo) Flores-Anderson and Christina (Brandon) Marine, 9 grandkids, Donovan, Lily, Kieara, Scarlett, Domingo Flores-Anderson, Hayden, Trinity, KendylJo, Paislee Marine; sister-in-law Lavon Anderson, 2 nieces and 3 nephews, several great nieces and great nephews and cousins. He was preceded in death by his parents Carl John Anderson Sr. and Viola Leist Anderson, his wife Charlene Ritze Anderson, his brother Emerson Anderson, and his sister Nancy and brother-in-law Lenny Deal.

The family of Carl John Anderson Jr. created this Life Tributes page to make it easy to share your memories.

Send flowers to the Anderson family.