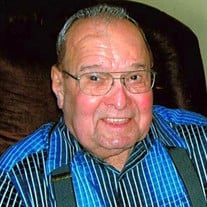 On Tuesday, August 20, 2019, Carl E. Brown, loving husband, father, grandfather,and great-grandfather, passed away at the Paula J. Baber Hospice House. He was born August 31, 1935, in West Bend, Iowa, the son of Lon and Fern Jacobs Brown. He married Linda Louise Hamann on June 7, 1959 and they recently celebrated their 60th Wedding Anniversary. Carl graduated from Rutland High School in 1953. He was a member of the Humboldt Unit of the Iowa National Guard for 8 years. He worked at the West Bend Elevator. He and his family moved to Callender, Iowa in 1963. During this time he worked at Celotex and later drove truck for Mallingers. The family then relocated to Barnum, Iowa in 1972 where he worked at Levien Chevrolet and farmed part-time. In 1982 he fulfilled his passion of becoming a full-time farmer. He retired from farming in 1998 and moved to Ft. Dodge. Carl enjoyed many years of farming especially raising baby calves. He loved going to polka festivals where strangers would turn into great friends. A highlight during the winter months was traveling to Arizona for 20 years. He enjoyed his new hobbies of hiking and playing ping pong. Throughout his life he always had a passion for playing cards with many friends and neighbors. One of the things he looked most forward to was the daily visit from “Sophie”, his grandpuppy. Survivors include his wife, Linda; three children, Larry (Teresa) Brown of Ft.Dodge, Sharon (Kevin) Markhardt of South Lyon, MI, and Mark Brown of Osage City, KS; 4 grandchildren, Lisa (Brent VanDeer), Kevin (Lisa Brown), Nicklaus Markhardt and Melissa Markhardt (fiancé Kristian Rowden); 4 great-grandchildren, Lydia and Megan VanDeer, Lyla and Kirk Brown; sister Marlene Harvey; and many nieces and nephews. He was preceded in death by his parents; siblings, Mildred, Catherine, Georgia, Tootie, Jeanie, and Bud. Visitation will be held from 4:00 – 7:00 p.m. Friday, August 23, 2019 at Gunderson Funeral Home & Cremation Services. Funeral will be held 11:00 a.m. Saturday at First United Methodist Church, and the burial will follow at 2:30 p.m. Saturday in the West Bend Cemetery. Memorials may be left to the discretion of the family.

The family of Carl E. Brown created this Life Tributes page to make it easy to share your memories.

Send flowers to the Brown family.