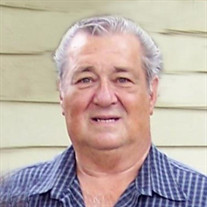 Carl Eugene Kelly departed this earthly life and entered into eternal rest in the early morning hours on March 21st. He passed away peacefully at the Paula J. Baber Hospice Home in Fort Dodge, Iowa; holding the hand of his Granddaughter and in company of his last surviving Daughter. Services will be taking place with a visitation Thursday, March 31st from 5-7pm at Gunderson Funeral Home in Fort Dodge, Iowa. Graveside Service will be performed by Carl's brother-in-law, John Judson, at 9:30am at the Veterans Cemetery in Adel, Iowa - with Full Military Honors Observed. Carl was born in Soldotna and then raised in the small village of Ninilchik, Alaska. His parents, Carl and Doris Kelly, raised him in the same home they shared until their own earthly passing. Growing up, Carl (and family) lived a very different life compared to those down in the "lower 48". They did not have running water in their home until Carl was in High School. That was also about the time that a paved road finally made its way though the Village of Ninilchik. Before that, the villagers had a small aircraft that would land once a week, with the villager’s orders of flour, fabric and other items in tow. The villagers lived mostly off the land, hunting, fishing, and gathering their own vegetables. Carl enjoyed getting back to his roots during his retirement; he built and maintained two small greenhouses and a small vegetable patch on his property. When Carl graduated High School, he enlisted in the United States Navy. Carl served on the USS Kittyhawk Naval Ship. After his first discharge he worked a variation of jobs including: long haul truck driving (he could definitely drive in ALL types of terrain), Air Traffic Controller and Correctional Officer at a Maximum-Security Prison in Alaska. He also re-enlisted in the Navy for a short tour during this time, finally being discharged in 1976, serving a total of 6 years, 8 months and 9 days in service. There are many incredible stories about his time served. And his family would be greatly interested in hearing any additional stories; please contact Felicia with more information. Carl spent his first official retirement years as a Computer Builder and Technician. Building computers from scratch and maintaining existing computers (and their security) for his surrounding community. He also spent his long winter months in Alaska in his woodshop, building custom crafted wood toys, to which he would send a few to his local family and then some to his grandchildren in Iowa but mostly he would donate to neighboring communities for auctions at fundraising events. Our hope is that his hand-crafted toys will be enjoyed and remembered by all those fortunate enough to receive one, for years to come. He most certainly put his effort into keeping himself busy during winter months. When woodwork got to be a bit much for him, he moved inward, back into his home and into building computers. In one winter, he built an entire state-of-the-art flight simulator from the ground up. To which he flew ONE time, before deeming it too complicated and handing it off to another relative. After the flight simulator was his 3D printer; his family received many of beautiful pieces of "art" that he made. He printed everything from Christmas ornaments, napkin holders, spare parts, bookmarks and even a wine bottle holder. His creations, digital expertise and skills will most certainly be remembered by his loved ones. About two weeks after Carl's Mom passed (December 21st of 2021), Carl found out he was diagnosed with Pancreatic, Liver and possibly Kidney cancer. The cancer was very advanced. Carl made the decision to come to Iowa on February 14th, 2022, to be closer to his Granddaughter(s), Grandchildren, Daughter and other remaining family during his final time on Earth. Carl is preceded in death by his daughter, Carla Grooms (Kelly) of Webster City, Iowa. His parents Carl and Doris Kelly of Ninilchik, AK; his brother, Clifford Kelly of Soldotna AK; and two sisters; Gail K Manley of Sparks, NV and Margaret L. Kelly of Ninilchik, AK. Carl is survived by his sister, Connie (John) Judson of Ketchikan, AK; sister-in-law Claudia Kelly; daughter, Wendy Fisher of Duncombe, IA. Granddaughter, Felicia (Topher) Hurtt of Duncombe, IA. Granddaughters Megan (Jeremiah) Baker of Fort Dodge, IA; Natalie (Chris) Long of Fort Dodge, IA; Aimee Kelly of Duncombe, IA & Grandson Jamison Worrick of Fort Dodge, IA. Carl is also survived by his nine (and a half) great-grandchildren. Whom he treasured so deeply. Grant, Cael, Greyson, Wyatt, Brock, Karlee, Adien, Jordin, Daimeen & one that is still in the making. Carl will be greatly missed by all those who were blessed to know him and love him. Memorials may be left to the discretion of the family.

Carl Eugene Kelly departed this earthly life and entered into eternal rest in the early morning hours on March 21st. He passed away peacefully at the Paula J. Baber Hospice Home in Fort Dodge, Iowa; holding the hand of his Granddaughter and... View Obituary & Service Information

The family of Carl Eugene Kelly created this Life Tributes page to make it easy to share your memories.

Carl Eugene Kelly departed this earthly life and entered into...

Send flowers to the Kelly family.