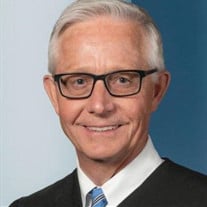 Mark Steven Cady passed away unexpectedly on November 15, 2019, while running with his dog Lucy in Des Moines, Iowa. Mark was born July 12, 1953, in Rapid City, South Dakota to Kenneth and Suzanne Cady. Mark was the second of two boys, Roger Cady, and was a brother to his two younger sisters, Katherine Schroeder and Karen Kochis. Mark and his family moved throughout the Midwest during their upbringing. Mark graduated from Austin High School in Austin, Minnesota in 1971, where he developed many life-long friendships. After high school, Mark followed his older brother, Roger, to Drake University where he earned both his undergraduate and law degrees. It was in law school where Mark met great friends who were with him the remainder of his life, including the love of his life, Rebecca (Becky). Mark and Becky married May 22, 1982, in Des Moines, Iowa. Mark and Rebecca moved to Fort Dodge, Iowa, after law school. Mark and Rebecca raised their two children Kelsi Fraser and Spencer Cady at their home in Fort Dodge. Mark was a caring neighbor and friend to many in the community of Fort Dodge. Mark started his 37 years as a public servant at the age of 29, when he was appointed as a Webster County District Judge in 1983. Mark was thereafter appointed to the Iowa Court of Appeals in 1994, voted Chief Judge of the Iowa Court of Appeals in 1997, appointed to the Iowa Supreme Court in 1998 and was named Chief Justice of the Iowa Supreme Court in 2010, where he served until his passing. Mark was a thoughtful and fair jurist who dedicated his profession to the pursuit of fair and equal justice. Mark was a humble, caring, and kind individual to everyone he encountered. His love in life was his family. Mark was a proud and loving husband to his wife Rebecca, father to his children Kelsi and Spencer, and grandfather to his four granddaughters, Brynn and Kinley Fraser, and Corah and Cameryn Cady. Mark is survived by his wife, Rebecca, daughter Kelsi (Bric) Fraser, son Spencer (Reilly) Cady, his four granddaughters, Brynn and Kinley Fraser, and Corah and Cameryn Cady, brother Roger (Kathy) Cady, sisters Katherine (Kevin) Schroeder and Karen (Frank) Kochis, sister-in-law Susan Imus, and his nieces and nephews Matthew (Tyler) Schroeder, Jeremy Schroeder, Kara (CJ) Novice, Ryan Cady, Sara (Aaron) Pavitt, and Erin (Austin) Collard, Jordan Louthan, Kaylee (Brandon) Engen, Jesse Kochis, and Luke Kochis. A public celebration of life is scheduled for 10:00 a.m. Wednesday, November 20, 2019, with front doors opening at 9 a.m. at the Knapp Center on the campus of Drake University. Parking lots 1 and 2 are reserved for funeral guests. In lieu of flowers, memorial donations can be made to The Iowa State Bar Foundation/Judicial Learning Center in honor of Chief Justice Mark S. Cady. Gunderson Funeral Home and Cremation Services is entrusted with the arrangements.

Mark Steven Cady passed away unexpectedly on November 15, 2019, while running with his dog Lucy in Des Moines, Iowa. Mark was born July 12, 1953, in Rapid City, South Dakota to Kenneth and Suzanne Cady. Mark was the second of two boys,... View Obituary & Service Information

The family of Chief Justice Mark Cady created this Life Tributes page to make it easy to share your memories.