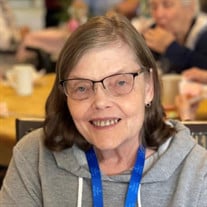 Christine Ann Metzger, 71, formerly of Fort Dodge, passed away on Saturday, December 18, 2021, at the Bickford Senior Living in Sioux City, Iowa, after a 3-year battle with breast cancer. A Mass of Christian Burial will be on 10:30 AM on Wednesday, December 22, 2021, at Holy Trinity Catholic Church in Fort Dodge. Visitation will be from 9:00 AM to 10:30 AM on Wednesday at Holy Trinity. Burial will be in the Corpus Christi Cemetery in Fort Dodge. The Gunderson Funeral Home & Cremation Services are in charge of arrangements. Christine Ann McIntyre was born August 22, 1950, to Bowen A. “Mac” and Blanche McIntyre in Fort Dodge, Iowa. She was raised in Fort Dodge where she attended school, and graduated from Saint Edmond High School in 1968, and later graduated from Bernel College of Cosmetology. She married Ivan L. Metzger on September 18, 1971, at Corpus Christi Church in Fort Dodge. Chris was a stay-at-home mom and classroom volunteer when her daughters were in elementary school. She then worked in the kitchen at St. Edmond High School. After her girls had graduated high school she opened her own gift shop Chris’ Front Porch in Fort Dodge. After her husband's passing in 2002 she closed her store and went to work at Sister Sadies gift shop. In March of 2014 She decided to fulfill her dream of living in Colorado and moved to Denver. A year later after deciding she wasn’t close enough to the mountains she moved to Estes Park, CO. She loved nature and animals and especially the mountains. In June of 2018 she was diagnosed with Triple Negative breast cancer, and that November she moved to Onawa, Iowa to be closer to her daughters. She was a member of the Onawa Woman’s Club and especially loved the card making class. In May of 2021 upon being diagnosed with metastatic brain cancer she moved to Bickford Senior Living in Sioux City with her beloved dog Zoe, until her passing. She is survived by her daughters, Heather (Rob) Wittrock of Barnum, IA, and Jessica (Beau) Hupke of Onawa, IA. Her five grandchildren, Logan, Keaton and Maddie Wittrock; and Brooklynn and Bridgette Hupke. Her Best Friend Renee Hinz of Florida, three sisters-in-law, and many nieces and nephews. She was preceded in death by her husband Ivan Metzger, parents Bowen “Mac” and Blanche McIntyre, and her two brothers Jim and Michael McIntyre.

Christine Ann Metzger, 71, formerly of Fort Dodge, passed away on Saturday, December 18, 2021, at the Bickford Senior Living in Sioux City, Iowa, after a 3-year battle with breast cancer. A Mass of Christian Burial will be on 10:30 AM on Wednesday,... View Obituary & Service Information

The family of Christine Ann Metzger created this Life Tributes page to make it easy to share your memories.

Send flowers to the Metzger family.