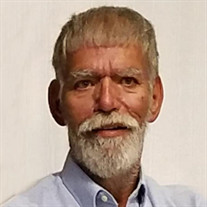 Charles “Chuck” Collmann, 67, of Otho, peacefully passed away and surrounded by family on July 26, 2020, after a brief, courageous battle with cancer. Visitation will be held from 4:00 – 7:00 p.m. Thursday at Gunderson Funeral Home & Cremation Services. Visitation will also be held 9:00-10:00 a.m., with funeral services beginning at 10:00 a.m. on Friday, July 31, 2020 at Gunderson Funeral Chapel. Interment will be held in St. Paul Cemetery, Manson following services. Chuck, the son of Lawrence and Esther (Bleuer) Collmann, was born March 4, 1953 in Fort Dodge. He graduated from Manson High School and Iowa Central Community College. Chuck married Mardeen Dahl on December 8, 1973, and from this union two daughters were born. The couple later divorced. On November 15, 1992, Chuck was united in marriage to Joan Crane. He was a life-long diesel mechanic by trade and retired a couple of years ago from Ziegler Caterpillar after 25 years. He was also a member of St. Olaf Lutheran Church. Chuck loved spending time with family and friends. He had passion for antique tractors and looked forward to his annual tractor rides from town to town. Chuck was also very talented in woodworking, creating many beautiful gifts for his family. He had a passion for helping friends and family, whether it be advice, repairs, maintenance or constructing something. He was great at teaching others how to DIY. His "board meetings" with friends was just one of the many highlights of his week. He will be greatly missed by many family and friends. Survivors include his daughters Amy (Steve) Breitbach, Ankeny; Charlene (Tim) Fairchild, Ankeny; five grandchildren; three stepdaughters, June Richardson, Jane Boyle, and Rachel Claussen; one stepson; many step grandchildren and step great-grandchildren; his twin brother Robert "Bob" (Mary) Collmann, Pomeroy and three nieces. He was preceded in death by his wife Joan, his parents and his step-sons-in-law, Mike Richardson and Bruce Boyle.

Send flowers to the Collmann family.