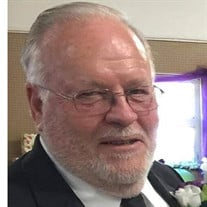 Curtis S. Nelson, 73, of Manson, Iowa, passed away February 7, 2019 at McAllen Medical Center, McAllen, TX, after being diagnosed with melanoma. Curtis Sherman Nelson was born on December 9, 1945 to Almira and Curtis Nelson in Alta, Iowa. Shortly after WWII his family moved to Alexandria, MN. His parents developed Lake Stony Resort where he was active in helping run the resort. Curt graduated from Alexandria High School in 1964 and attended St. Cloud State for one year and then moved to Mankato, MN. He worked at Slater Food Corporation at Mankato State College, where he met his wife of 51 years. On October 6, 1967, Curt was united in marriage to Deloris (Dee) Vosberg. He served in the U.S. Air Force and was honorably discharged in 1971. The couple made their home in Manson and Curt worked for Glynn Construction, Farm Bureau Insurance, Collmann Insurance, retiring in August, 2018. He was an active member in the Immanuel Lutheran Church, Rockwell City. Curt enjoyed golfing, time spent with family at their cabin in Alexandria, MN and fishing in Canada. After Dee’s retirement in 2013, the couple enjoyed wintering in Florida. This past year they became campworkers in Mission, TX maintaining the pools for the RV Park up until his sudden illness. Survivors include his wife Dee; his son Jeff (Lisa) of Fort Dodge, grandson Dillon and granddaughter Sydney; son Ryan (Brandie) of Manson and step- grandson, Connor Malinger; his sister Lenore Wheat of Madison, WI; his nieces Cindy Wheat (Denis Morinoto), Jeanette Wheat, Gretchen Wheat (Jake Jacobson), Jayne Douglas; great nephews, Adam and Jarod Wheat. He was preceded in death by his parents Curtis and Almira Nelson, his in-laws Ernie and Marie Vosberg, his brother-in-law Karl Wheat, nephew Daryl “Pete” Kruger. Memorial service will be held at 10:30 a.m. on Saturday, June 1, 2019 at Immanuel Lutheran Church, 3010 270th St. Rockwell City, Iowa. Visitation will be held prior to the service beginning at 9:00 a.m. at the church. In lieu of flowers, memorials may be left to the discretion of the family.

The family of Curt S. Nelson created this Life Tributes page to make it easy to share your memories.

Send flowers to the Nelson family.