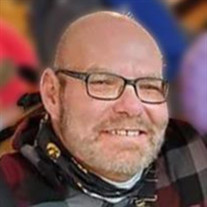 Danny Lee Moore, 61, of Fort Dodge, died on Sunday, April 4, 2021, at UnityPoint Health Iowa Methodist Medical Center in Des Moines. Danny's final wishes were to have a celebration of life at his favorite bar Amigos. Please join us at Amigos Saturday April 10th at 3pm to honor his memory. Gunderson Funeral Home & Cremation are handling arrangements. Danny is survived by his wife, Cathy; their two sons, Ryan (Deanna) Moore and their two children Naiven and Jayden all of Fort Dodge and Austin Moore (Mariah) of Iowa City, Iowa; his sister, Patty (Harold) Powell of Atlantic, Iowa and his beloved dog Baylie. Danny is preceded in death by his parents, Rex and Geraldine (Stufflebean) Moore, two brothers Rex & Billy Moore, his sister Sharon Wendell, nieces Kelly Martin & Heather Moore & nephews Mikey Wendell & Harold Powell II. Danny Lee Moore, the son of Rex and Geraldine (Stufflebean) Moore, was born May 18, 1959 in Fort Dodge. After graduating from Fort Dodge Senior High in 1977, Danny enlisted into the United States Army Military Police Corps. After his time in the Army, Danny came back to Fort Dodge and drove delivery trucks for Budweiser Distributing and later managed the DX Service Station on South 169 for a year. Then in 1979, Danny began driving a truck for Fort Dodge Asphalt. On August 30th, 1986, Danny was united in marriage to Cathy Witte. After their marriage, the couple made Fort Dodge their home. During Danny’s career of 42 years at Fort Dodge Asphalt he worked his way up to being a crew foreman and later overseeing all slurry crews. He was recently promoted to maintenance supervisor. Danny loved camping and boating with his family and friends, drag racing his '98 Trans Am, shooting guns and riding motorcycles with his wife Cathy. He also enjoyed playing card games like Texas Hold 'em and Pitch with his friends. Danny was a member of the Fort Dodge Gun Club and the NRA. In Lieu of flowers the family asks that you donate to one of the following charities: Save the Tatas, Sleeping Angels, or Iowa Donor Network.

The family of Danny Lee Moore created this Life Tributes page to make it easy to share your memories.

Send flowers to the Moore family.