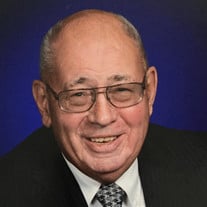 David Keith Peters, 78, returned to his heavenly home on December 22, 2019 at the Paula J. Baber Hospice Home in Fort Dodge, Iowa. His devotion to his family and friends and his firm belief in God supported him in his struggle and ultimately gave him peace. Services will be 11:00 AM on Saturday, December 28, 2019, at the St. Olaf Lutheran Church in Fort Dodge. Burial will be in the St. Olaf Cemetery. Visitation will be 4:00 PM to 7:00 PM on Friday at the Gunderson Funeral Home and Cremation Services in Fort Dodge. David was born to the late Walter and Mildred Peters on August 24, 1941 in LeMars, Iowa. He was raised in Ireton, Iowa with his three brothers and one sister. He graduated from Ireton High School in 1959 and went on to receive his Bachelor of Science Degree from the University of South Dakota. Dave married the love of his life, Carole Rae McGuire, on December 27, 1962 in Hawarden, Iowa. They have three children, whom Dave adored. David received the National Science Foundation Scholarship to the University of Northern Iowa, where he received his Masters Degree in Mathematics. He and his family moved to Fort Dodge in 1969 and he taught mathematics at Fort Dodge Senior High for 33 years. Dave also worked at Sears part-time for 26 years. David was an active member of St. Olaf Lutheran Church where he served as an usher for nearly 50 years. He currently served on the St. Olaf Foundation Board. Dave also passionately served as the leader of the St. Olaf Oles, a retired men’s group. Dave loved spending time outdoors and nurturing his plants. He enjoyed the simple things in life like a family picnic at Dolliver Park and collecting nativity scenes to share at his church. Dave shared his zest for life with his seven grandchildren and two great-grandchildren. He will be dearly missed by his loved ones who celebrate the fact that he is at peace with his creator. David is survived by his wife, Carole; his children, Robin (Henry) Valle of San Benito, TX, Debra (Jeff) Cook of St. Louis, MO and Matthew (Kelly) of Hamburg, IA; his grandchildren Kyle (Jessica) Cook, Kelsey (Brian) Todd, Jordan Bennett, Emma Valle, Benjamin Valle, Nikolas Peters, and Lilly Peters; his great-grandchildren Evelyn Todd and Rory Bennett; his brothers, Ronald (Sheryl) Peters of Sibley, IA, Dennis Peters of Hawarden, IA, Robert (Linda) Peters of St. Petersburg, FL,: his sister, Patricia (Larry) Holm of White House, TX: his brother-in-law Gerald (Beverly) of Luverne, MN and sister-in-law Arvilla McGuire of San Clemente, CA. He is preceded in death by his parents Walter and Mildred Peters, his in-laws Lloyd and Beulah McGuire: brother-in-law Ronald McGuire and sister-in-law Randee Peters. In lieu of flowers, the family requests that memorial be made to St. Olaf Lutheran Church Oles.

David Keith Peters, 78, returned to his heavenly home on December 22, 2019 at the Paula J. Baber Hospice Home in Fort Dodge, Iowa. His devotion to his family and friends and his firm belief in God supported him in his struggle and ultimately... View Obituary & Service Information

The family of David Keith Peters created this Life Tributes page to make it easy to share your memories.

David Keith Peters, 78, returned to his heavenly home on December...

Send flowers to the Peters family.