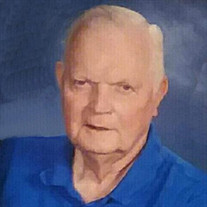 David Dean Schrader, 85, of Fort Dodge passed away on Monday, June 10, 2019 in his home surrounded by family. Services will be on Monday, June 17, 2019 at 10:00 a.m. at Grace Lutheran Church with a visitation to be held at the church from 9-10 a.m. Burial will take place at the North Lawn Mausoleum. Arrangements are being handled by Gunderson Funeral Home and Cremation Services. David was born on August 2, 1933 in Atlantic, IA to Arlene Schrader. He grew up in Cumberland, IA and graduated from Cumberland High School. David Joined the Army in 1953 and then married Lorraine Julifs in 1954. They were later divorced. On May 21, 1993 David Schrader was united in marriage to Sheila Boone. He worked for Hormel’s until retirement in 1984. He enjoyed spending time with his family, bowling and fishing. David is survived by his wife, Sheila Schrader; their children, Shawn Hart, Tina (William) Heyerhoff, Mel (Sarah) Boone, Teresa “T.J.” (Jon) Boone; his children, Kathy Boutchee, Kristi Brown, Kellie Landon, and Kay; his siblings, Barbara Symonds and Carolyn Symonds; many grandchildren; and several great-grandchildren. He was preceded in death by his grandparents, Melinda and Fred Schrader; his mother, Arlene Schrader; his brothers, Gary Symonds and Jim Symonds; his aunt, Elzene Taylor; and Doris Ann Allen. Memorials may be left to the discretion of the family.

The family of David Schrader created this Life Tributes page to make it easy to share your memories.

David Dean Schrader, 85, of Fort Dodge passed away on Monday,...

Send flowers to the Schrader family.