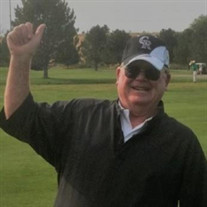 Dean Ronald McCallum, of Fort Dodge, died on Wednesday, December 16, 2020, at Fort Dodge Trinity Regional Medical Center. Funeral services are currently pending. Dean was born on January 15, 1940 in Yankton, SD to Archie & Bengtha (Jensen) McCallum of Bloomfield, NE. He was the youngest of 6 children, raised on a farm & always played sports in school. His junior year he moved with his mom & dad to Whittier, CA. During high school, he helped his parents financially by working after school bagging groceries at Von’s Shopping Bag and was promoted to the meat department which began his long career in the grocery business. While working, he attended Pasadena City College and he played semi-pro baseball in the Duarte & Azusa area. He was then drafted into the army and served as a cook in Washington and on the Central CA coast (Fort Ord). Following his time in the Army he met and then married, Nancy Jo (Fox) in 1966. {She already had a son named Blake, from a previous marriage and my dad adopted him at 5 years old. They settled in West Covina and then had their daughter together (Dana).} In 1974, the family moved to Nampa, Idaho to begin to further his career in the grocery business as a meat cutter. He was promoted to meat & produce supervisor over all of M&W Markets and retired in 1999. As a recognized pillar in the community, he coached 6th grade boys basketball in the 1970-80’s, which he really enjoyed, a member of the Elks Club, and took up golfing at the local golf course and later sat on the board. Dean enjoyed dancing and music. He loved listening to an old radio as well as country and mo-town music. Family was important to Dean traveled to central Oregon almost every summer to enjoy a week with the McCallum family. {And my dad loved it there.} {Dec. 8, 1994 my mom passed away suddenly from a stroke, my mom’s funeral was standing room only at about 250 people, which just goes to show how much our community loved my folks.} Dean-o, as he was known by all, loved to talk to family and friends over the phone and the internet. It was the internet where he reconnected with an old high school flame, Dorothy Mae (Jacob). He moved to Fort Dodge, Iowa and on June 22, 2004 they were married. They were fortunate to be able to travel and spent the winter months in McCallen, Texas. He was very proud of his Scottish heritage and even traveled to Scotland to reconnect with his family abroad. He loved all four of his grandchildren. He spent time with them in their own unique way. Traveling with his granddaughter, Jessica, was at the top of his list. He would also be seen cheering on his grandson’s in their high school events or spending one-on-one time playing golf, shooting, or just taking them out to eat. Dean was a God fearing man who devoted his life to his family. Dean knew no stranger and would do anything for a neighbor in need. He was known to bring fruit to the gals at the bank and donuts to others. Dean was loved and will be truly missed. He was preceded in death, by his parents and siblings Andrew, Melvin, Lyle, Dale, and Ruby and his first wife Nancy Jo McCallum. He is survived by his wife Dorothy McCallum of Fort Dodge, IA, daughter Dana McCallum-Ruter, son-in-law Steve Ruter of Portland, OR; son Blake McCallum, step-daughter Sherri Berg (Brad); grandchildren Jessica McCallum (Blake) of Nampa, ID, Tyler, Brayden, and Codey (Berg) of Woolstock, IA; many nieces & nephews and beloved friends.

The family of Dean Ronald McCallum created this Life Tributes page to make it easy to share your memories.

Send flowers to the McCallum family.