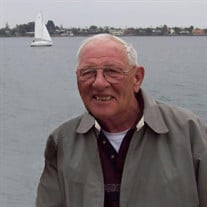 Don Albert Resseguie, 80, of Fort Dodge died on Tuesday, March 1, 2022, at home surrounded by family and friends. A Gathering of Family and Friends will be held from 2-4 p.m. Sunday, March 6, 2022 at Gunderson Funeral Home and Cremation Services. An inurnment with military honors will take place at a later date at North Lawn Cemetery. Don Albert Resseguie was born on September 18, 1941, to Howard and Ivalee (Smith) Resseguie in Fort Dodge, IA. He attended Havelock High School until 1959, when he left to join the U. S. Navy. He entered the Navy in February of 1959 and was honorably discharged on September 18, 1962. Don Resseguie was united in marriage to Lorraine Clark in 1966, but they later divorced. Don worked for a telephone company and then as an AE milk truck driver. He also owned a Dale Pro Station. Don then moved to California and was united in marriage to JoAnne Brown in November of 1992. They were happily married until JoAnne’s passing on January 19, 2000. He then retired in 2001 and moved back to Fort Dodge. Don was united in marriage to JoDene Harmon on June 16, 2009. They were happily married until JoDene’s passing on January 11, 2021. Don loved golfing, especially at Lakeside. He also enjoyed traveling south to Texas, Arizona, and California. Don had a passion for motorcycles, especially hill climbing in his earlier years and loved going to car shows. He also enjoyed going to Casinos and often had good luck. Don loved his family, especially his grandchildren and watching their events. Don is survived by his children, Angela Ressguie-Richardson and Todd Resseguie; grandchildren, Melissa (Jason) Jones, Maranda (Andy) Geerdes, and Madeline Richardson; great-grandchildren, Landon, Hudson, A’Raeya, Rowan, and Lydia; his step-children, Erin, Eric, Kathleen, Tracy, Marcy and families; and his siblings, John (Pauline) Resseguie, Lee (Charlene) Resseguie, and Kathy Gable. He was preceded in death by his late wife, JoDene; wife, JoAnne; parents, Howard and Ivalee; stepfather, Byron; his twin, Dean; and his brother-in-law, Bill. In lieu of flowers, memorials may be directed to the discretion of the family.

Don Albert Resseguie, 80, of Fort Dodge died on Tuesday, March 1, 2022, at home surrounded by family and friends. A Gathering of Family and Friends will be held from 2-4 p.m. Sunday, March 6, 2022 at Gunderson Funeral Home and Cremation Services.... View Obituary & Service Information

The family of Don Albert Resseguie created this Life Tributes page to make it easy to share your memories.

Send flowers to the Resseguie family.