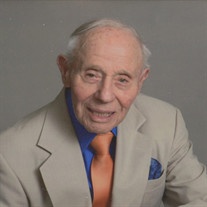 Donald E. Johnson, 96, of Fort Dodge, died Thursday, November 21, 2019, at the Paula J. Baber Hospice Home. A service honoring Donald’s life will be 11:00 a.m. Monday, November 25, at First Covenant Church, with the Rev. Allan Redenius officiating. Interment will follow at North Lawn Cemetery. Military honors will be presented by V.F.W. Post No. 1856, and the Iowa Army National Guard. Visitation is 9:30 to 10:45 a.m. Monday at First Covenant Church. In lieu of flowers, memorials may be directed to First Covenant Church. Arrangements have been entrusted to Gunderson Funeral Home & Cremation Services. Donald is survived by his daughters, Beverly (Larry) Gleason, Goodyear, Ariz.; Joyce (Doug) MacCarthy, Aurora, Colo.; and Diane (Craig) Barnes, Trophy Club, Tex.; seven grandchildren, seven great grandchildren, many nieces and nephews and two half sisters, Karen Anderson and Colleen Hay. He was preceded in death by his parents, his wife Marion, two sisters, Mildred Westlake and LaVonne Weintzetl, a brother Duane and two half brothers, Larry and Dale. Donald Eugene Johnson, the son of Sigure and Lillian (Simpson) Johnson, was born July 23, 1923, in Fort Dodge. He graduated from Fort Dodge High School in 1942. Don served in the United States Army from January 1943 to December 1945. He was a tech sergeant and participated in the liberation of the Philippines. On October 19, 1946, Donald was united in marriage to Marion Johnson at First Covenant Church in Fort Dodge and they were married 62 years. Don began working at Kaderabek as an electrician and later purchased the company which he operated until his retirement in 1985. As an electrical contractor, he was involved in many projects throughout the community including many homes, Lutheran Hospital, Crossroads Mall, Fort Dodge Labs and First Covenant Church to name a few. Don was a member of First Covenant Church where he served on many committees and in leadership positions and was a member of the V.F.W. He was an avid golfer and softball player, playing on a team which won many city tournaments and participated in the nationals held in Arizona. He and Marion enjoyed traveling and spent more than 25 years worth of winters as snowbirds in Arizona.

The family of Donald Eugene Johnson created this Life Tributes page to make it easy to share your memories.