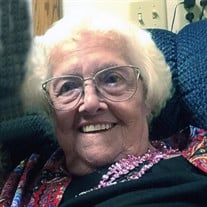 Donna Jean Monkelien, 89, of Fort Dodge, passed away on Wednesday, December 11, 2019 at the Marian Home in Fort Dodge. Funeral services will be 11:00 AM on Wednesday, December 18, 2019 at the Gunderson Funeral Chapel in Fort Dodge. Visitation will be from 10:00 to 11:00 AM on Wednesday at the Gunderson Funeral Home and Cremation Services in Fort Dodge. Burial of cremains will be in the Chapel of Peace Mausoleum at North Lawn Cemetery in Fort Dodge. My life as Donna Jean McDonald began in a farm house one mile north and one mile west of New Providence, IA. I was born there on October 22, 1930 to David T. (Oppie) and Sattie (Vestal) McDonald. When I was 4 years old, my parents and older brother James moved to a farm SE of Eldora. It was owned by Guy Follett and is now known as the Twister Farm since it was chosen to be part of the movie. While there I attended Whitten Consolidated School for 10 years. I was supposed to attend a country school one mile south of our house but my parents paid tuition so I could attend Whitten. In high school there I was post forward on the basketball team, in glee club a sextet and trio. I loved living in that big while house and I had my own horse “Bessie.” In the spring of 1946, my parents quit farming and moved to Marshalltown where I graduated from high school in 1948. Back then there was no girls’ basketball in school so I played in a church league. I was in awe going from a class of 15 to 185. After graduation I was immediately hired to be secretary to my High School principal. After four years there, I went to work for Doctor Keyser, Trey and Kruse. In January of 1958, I started working at General Adjustment Bureau. One of the questions the manager asked was, “Do you have any plans to get married?” Little did I know then that I would meet the man of my dreams any time soon. It was on March 22, 1958. I kept score for the Fort Dodge V.F.W. Bowling team at the State V.F.W. Bowling tournament. It just so happened that Richard Monkelien was on that team. Dick made the trip to Marshalltown every weekend after until our marriage June 14, 1958. We made our home in Fort Dodge. I was able to continue employment with General Adjustment Bureau here. In 1972, I changed to Kelley Insurance Agency until Bob and Tom Kelley sold their business to Larry Calvert and Bob Singer Insurance Agency in 1988. I continued there until retirement in September 1995. After working insurance claims for 35 years, it was time. Dick and I bowled for many years. I was able to win Class E singles in 1955 at the Women’s State Bowling tournament and in 1959 I won Class C Singles in the same tournament. We also enjoyed traveling. We have been in all 50 states together as well as Australia, New Zealand, Mexico and Canada, plus 5 cruises. We used to go to Chicago for an entire week to watch our dear Cubs. That was early in the 60’s and back then we were able to get our seats right behind the Cubs dugout. Dick and I were also great fans of Chicago Bears and Iowa Hawkeyes. I am a lifetime member of First Friends Church and I have belonged to the V.F.W. Auxiliary for over 50 years. I look forward to heaven and joining the loved ones who proceeded me in death, my darling husband Richard, my brother James McDonald, my parents, 22 aunts and uncles, my husband’s parents Bill and Bertha Monkelien and Dick’s step-sister Patsy Negrete and many dear friends. I also want to see two beloved pets, Pepper and Peaches with their tails wagging. I am survived by a niece Peggy McDonald in LaGrange Park, IL and cousins in Iowa, North Carolina, Indiana and Kansas. I am also survived by a wonderful group of friends who have meant so much to me. We got together every Wednesday evening at the V.F.W. We’ve also traveled many miles together on Saturdays. We called them our Safari. I read something recently which I believe, “Don’t walk in front of me, I may not follow. Don’t walk behind me, I may not lead. Just walk beside me and be my friend.” It’s not what you have in your life but who you have in your life that counts. I hope I will be remembered as someone who was a good friend, had a positive attitude, loved to help people, dedicated to my job, was a good wife to Dick and someone nice to know. Being 87 years old I have truly been there, done that in so many ways. I have seen much, done much and still search for much. I give thanks to all those who have helped me over my lifespan. I give thanks to all those whose backs and shoulders I have stood all the time. I have been so blessed in receiving all my gifts of love, laughter and life. I was given the gift of life and now I have to give it back. This is hard. But I was a lucky woman who had a lucky existence and for that I am grateful. My dear husband, knowing you’ll be there makes is easy to go home.

The family of Donna Jean Monkelien created this Life Tributes page to make it easy to share your memories.

Donna Jean Monkelien, 89, of Fort Dodge, passed away on Wednesday,...

Send flowers to the Monkelien family.