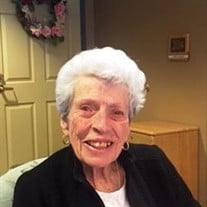 Doris L. Trainer, 98, of Fort Dodge, died Sunday, December 29, 2019, at the Simpson Health Center of Friendship Haven. A service honoring Doris’ life will be 11:00 a.m. Saturday, January 4, 2020, at the Gunderson Funeral Chapel. Interment will be in Amsterdam Township Cemetery near Kanawha. Visitation is 5:00 to 7:00 p.m. Friday at the Tompkins Celebration Center at Friendship Haven and then from 10:00 to 11:00 a.m. Saturday at the Gunderson Funeral Chapel. Memorials may be directed to the Good Samaritan Fund at Friendship Haven. Doris is survived by her children, Sondra Thorson; Bobbie (Larry) Turpen; Todd (Mary) Trainer; 16 grandchildren, 32 great grandchildren, six great-great grandchildren; sister-in-law Teresa Powers; and many nieces and nephews. She was preceded in death by her parents, her husband Robert, her daughter Gayle Lamb, her brother Richard L. Powers, her sons-in-law, Doug Thorson and Jerry Lamb, and her stepmother Nellie Powers. Doris Lorraine Powers, the daughter of Chester and Ruth (Miller) Powers, was born March 26, 1921, near Greenwood, Wisconsin. She moved with her family to Kanawha and graduated from Kanawha High School in 1939. On September 8, 1939, Doris was united in marriage to Robert E. Trainer. They moved to Fort Dodge in 1945. Doris was once employed at the University of South Dakota School of Nursing and then worked at Iowa State Job Service, from where she retired in 1981. Doris was a longtime active member of Riverside United Methodist Church, United Methodist Women and was a 50 year member of the Order of Eastern Star. She was active in the American Legion Auxiliary, the women’s golf association and women’s bowling leagues. She enjoyed traveling, playing cards and dancing. Doris treasured annual family trips to Minnesota (a 65 year tradition). She was grateful for how blessed she was to have a good long life. For Doris, her family always came first and foremost.

The family of Doris Lorraine Trainer created this Life Tributes page to make it easy to share your memories.

Send flowers to the Trainer family.