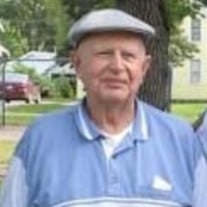 Elmer Baardson, 91, of Fort Dodge, died August 26, 2021 at Unity Point Health-Trinity Regional Medical Center. A private family funeral service will be held on Saturday, September 4, at Gunderson Funeral Home & Cremation Services. Elmer Bernie Baardson, the son of Nils Johan and Brita (Klubben Simonsen) Baardson, was born March 6, 1930 on a farm in Hardy, Iowa. Elmer graduated from Grove township country school (Grove No. 7) and attended ICCC to receive a certificate of completion in Electrician Training Course. On April 16, 1952, Elmer was united in marriage to Phyllis E. Powers at the home of the brides parents in Pioneer, Iowa. Elmer was discharged from the United States Marine Corps serving in the Korean War on January 5, 1954 in California. Elmer and Phyllis moved and made their home in Fort Dodge, Iowa where he was employed at United States Gypsum Co. and helped his dad on the family farm for many years. In 1963 he was employed as a truck driver for Crouse Cartage Co. until his retirement. Elmer received a Certificate of Recognition as a member for 63 years with Epworth United Methodist Church. Elmer loved golf and spending time with his children and grandchildren. He will be remembered by many as a loving and caring person who helped anyone in need. Survivors include his children, Kathryn (Larry) Hedeen, Duane (Lori) Baardson, David (Kristen) Baardson all of Fort Dodge; Connie (David) Krause of Eagle Grove; 10 grandchildren, 13 great-grandchildren; sisters-in-law Eileen Baardson, Donna Moline and Marge Powers; brother-in-law C. Gordon Powers, and many nieces and nephews. He was preceded in death by his parents, wife Phyllis in 2015; mother and father-in-law Charles and Irene Powers; brother Andrew Baardson; sisters Helen Dodd and Jeannette Christensen, brothers-in-law Delmar Christensen, Earl Dodd, Jesse Solbeck, Albert and Harold Powers, Ivan Nesvold, and Richard Moline; sisters-in-law Alberta Nesvold and Julie Baardson, grandson Michael Ostbloom. Memorials will be left to the discretion of the family.

The family of Elmer Bernie Baardson created this Life Tributes page to make it easy to share your memories.

Send flowers to the Baardson family.