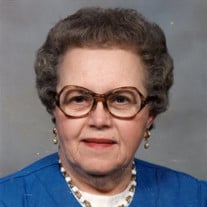 Elouise L. Klaessy, 100, of Marshalltown, formerly of Fort Dodge, died February 20, 2020 at Grandview Heights Rehab and Healthcare in Marshalltown. A service honoring Elouise’s life will be 11:00 a.m. Saturday, February 29, at the Gunderson Funeral Chapel with the Rev. John Hembry officiating. Interment will be in the LuVerne Township Cemetery. Visitation is 10:00 to 11:00 a.m. Saturday at Gunderson Funeral Home & Cremation Services. She is survived by her sons, Richard Klaessy, Marshalltown; Don (Barbara) Klaessy, Avondale, Arizona; six grandchildren, ten great grandchildren; and many nieces and nephews. She was preceded in death by her husband, her parents and two brothers, Jay and Loren. Elouise L. Olson, the daughter of Martin J. and Jennie (Tesdahl) Olson, was born August 5, 1919, on a farm near Hardy. She attended schools in Hardy and graduated from Vernon Consolidated School in 1936. She married Eugene Klaessy in 1938 and live for a time near Renwick. They also lived in Fort Dodge, Monmouth, Ill., and Chetek, Wis., where her husband passed away in September 1976. At the time of his death they were both employed at The Chetek Research Company. She returned to Fort Dodge and was a member of Trinity United Methodist Church where she was a member of U.M.W., was flower chair for a number of years, a member of the Helping Hands Group and also the Prayer Line.

The family of Elouise L. Klaessy created this Life Tributes page to make it easy to share your memories.

Send flowers to the Klaessy family.