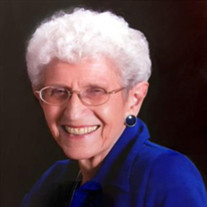 Erma Larsen (Thelke), from Dows, Iowa, was born January 10, 1928. At 18, she moved to Ft. Dodge where she met Wendell Larsen, home on leave from the Navy. The two were married in 1948 and remained so until Wendell’s passing in 2010. In 1954, Larsen Electric Motor Service was founded and Erma worked alongside her husband as bookkeeper. Erma also worked at the Fort Dodge J.C. Penney as credit manager for 26 years. The family attended St. Paul’s Lutheran Church, where Erma was actively involved. Erma’s joy was rooted in family; she was devoted to her three children, always involved in their activities and schooling. In retirement Erma remained an avid swimmer and enjoyed her many friends and card clubs. Three years ago, Erma moved to Ogden, Utah where she could stay close to family and get to know her great-grandchildren. She would often share with them, tales of her own childhood, including when she had to "walk miles and miles" to get to the one room schoolhouse where she was educated. Spry and active until the end, Erma continued to dedicate herself to her family, friends and faith. Erma Larsen died June 2, 2020 in Ogden Utah surrounded by family. She will be dearly missed by all. Erma is survived by her three children, Linda (Tom) Black, Tonasket, WA., Vance (Deb) Larsen, Eden, UT., Lori (Tom) Piper, Burlington, VT., Grandchildren, Travis (Vaughan) Larsen, Blake (Tiffany) Larsen, Margaret Black, Alex Piper, Zachary Piper. 3 step-grandchildren, Jack (Tanya) Black, Shawn (Aimee) Murphy, Darren (Tracy) Murphy and 8 great grandchildren. There will be a graveside service, Monday June 8 @ 10am at North Lawn Cemetery, Ft. Dodge. In lieu of flowers please send donations to Unity Point Hospice, Ft. Dodge.

The family of Erma Larsen created this Life Tributes page to make it easy to share your memories.

Send flowers to the Larsen family.