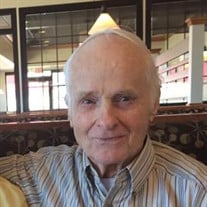 Ernest Raymond Johnson Jr., 87, of Duncombe, passed away on Friday, May 10, 2019 at Southfield Wellness Community in Webster City. A celebration of life will be held at 10:30 a.m. on Tuesday, May 14, 2019 at the Gunderson Funeral Home and Cremation Services. Burial will be in North Lawn Cemetery with full military honors conducted by the VFW Post #1856 and the Iowa Army National Guard. Visitation will be held from 4:00 p.m. to 7:00 p.m. on Monday, May 13, 2019 at Gunderson Funeral Home and Cremation Service. Ernest Raymond Johnson Jr., the son of Ernest Raymond and Helen Kelly (Fonda) Johnson, was born at St. Joseph Hospital in Sioux City, IA on January 19, 1932. He was primarily raised in Battle Creek, IA though he lived a short time in the surrounding small towns. While in high school, he ran track and played baseball. He graduated from Battle Creek High School in 1951. He was then drafted into the U.S. Army and stationed at Camp Roberts, CA for 16 weeks of basic training. Then he was sent to Fort Hood, TX for advanced training in the tank battalion, in the 40th division. In January of 1952, he was sent to Korea and served a year on the front line. He was honorably discharged from service in 1954. After returning home he worked for the Greenbay Lumber Company. In 1955, his family moved to California and lived in Topanga Canyon. Ernie worked for Douglas Aircraft in Santa Monica, CA. In 1959, Ernie moved to Fort Dodge, IA where he worked for Pan-O-Gold Bakery from 1959 to 1966 and later that year he began working for Wilbert Burial Vault Co. On June 21, 1969 Ernest married Judy Jane Purkapile at Riverside Methodist Church by Rev. Robert Leverns in Fort Dodge, IA. Judy and Ernie lived in Fort Dodge at the Village Green Mobile Home Park and then in August, 1977, moved to Rural Duncombe, IA. He retired from Wilbert Vault Company in 1994 after 28 years of service. Ernie is survived by his wife, Judy Johnson; his son, Craig Johnson of Webster City and his daughter, Katie Johnson of Fort Dodge; his three grandchildren, Bishop Johnson, Justice Johnson, and Liberty Johnson, all of Fort Dodge. He is also survived by his sister, Ailene Joyce Albright; and his brother, James Robert Johnson. Ernie was preceded in death by his parents, his sister, Mayola Jean White and his brother, Gary Eugene Johnson.

Ernest Raymond Johnson Jr., 87, of Duncombe, passed away on Friday, May 10, 2019 at Southfield Wellness Community in Webster City. A celebration of life will be held at 10:30 a.m. on Tuesday, May 14, 2019 at the Gunderson Funeral Home and Cremation... View Obituary & Service Information

The family of Ernest Raymond Johnson Jr. created this Life Tributes page to make it easy to share your memories.

Ernest Raymond Johnson Jr., 87, of Duncombe, passed away on Friday,...