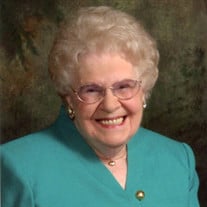 Esther M. DuPey Sickman, 103, of Fort Dodge, died Wednesday, January 15, 2020, at the Simpson Health Center at Friendship Haven. A service honoring Esther’s life will be 1:30 p.m. Sunday, February 9, at the Tompkins Celebration Center at Friendship Haven. Visitation is 12:00 until service time at the Tompkins Celebration Center. Interment will be in Memorial Park Cemetery. Memorials may be directed to the Congregational Church Memorial Foundation. Arrangements have been entrusted to Gunderson Funeral Home & Cremation Services. Esther is survived by her daughter LaVera Meardon (LeRoy) Wadzinski, West Des Moines; her son-in-law Larry Devlin, Fort Dodge; grandchildren, Denise (Doug) Kruse, Lisa (Paul) Donnelly, Christine (Scott) Greaves, and Eric (Val) Nafe; 16 great grandchildren; several great-great grandchildren;; and many nieces and nephews. She also helped to raise a special family friend who was just like a daughter, Susan (Jim) Ricke, and was godmother to Susan’s daughter, Anna. She was preceded in death by her parents, her two husbands, her daughter Earla Devlin; granddaughter Leanna Nafe her siblings, Helen Mulnix, Andrew Mulnix, Mildred Elm, Ella Davis and Marilyn Eastlund, and her infant sister Ethel. Esther M. Mulnix, the daughter of Ira and Waneta Zazle (Young) Mulnix, was born May 29, 1916, at Rochester, Minn. She was reared and educated in Minnesota and Waterloo, Iowa. On January 25, 1934, Esther was united in marriage to Earl DuPey at Independence, Iowa, and he preceded her in death in 1981. On September 21, 1986, Esther was united in marriage to Elwin Sickman at Washington, Iowa, and he preceded her in death in 1987. Esther lived in Waterloo and Venice, Fla. She was fashion manager for Montgomery Wards for 20 years prior to her retirement. She also helped with school lunches in the Fort Dodge Community School District at South Junior High. Esther was a member of the First Congregational United Church of Christ, where she served on the church board and on church circle. She was secretary/treasurer for Church Women United and was active with the Art Club of Fort Dodge. She loved to read, crochet, keep track of the family business, dancing, bowling and camping. She travelled to all provinces of Canada and all states in the U.S.A. She was active in ladies auxiliary, Local 31 United Packing House and her 500 Club Card Club. Esther’s infectious smile and sunny disposition was admired by all who knew her. Every day held a silver lining and no matter what she faced, she always found it and encouraged others to do the same. Up until five years ago Esther kept a daily journal. These journals are priceless and provide amazing insight to the daily and world events as seen through her eyes.

The family of Esther M. DuPey Sickman created this Life Tributes page to make it easy to share your memories.