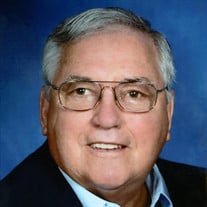 Gene Richard Hayes, of Fort Dodge, passed away peacefully at his home on September 28, 2021. Gene was born January 15, 1940, in Webster City to Warren Lester and Blanche (Nelson) Hayes. He graduated from Lincoln High School in Webster City with the class of 1959. While in high school he participated in football and track and was a member of the 1958 Football Conference Championship team. He went on to attend Webster City Junior College and Iowa State University. Gene was united in marriage to Janet Larson in 1965. Together they shared in 56 years of marriage. In 1967 he began a 39 year career with United Co-op. He was a member of First Presbyterian Church serving on many committees as well as a Deacon and Elder. Gene is survived by his wife Janet; daughter Shelly (Kent) Keith; son Todd; grandchildren, Abby (Zach) Grove, Ashton Rhoades, Kate, Kael, and Kai Keith; great-grandchildren, Klaire and Aiden Grove, Eva and Khari Rhoades; brothers, Leroy Hayes, Russell (Connie) Hayes, and Ted (Jeri) Hayes; sisters-in-law Teresa Hayes, Alice Hayes, and Beverly Hayes; and many extended family, nieces, and nephews. Gene was preceded in death by his parents; in-laws, Mervin and Mildred Larson; brothers, Harlan, Bob, Gary, Steve, Roger, and Clifford; great grandson Eli Grove; and many extended family members. Gene was a man of great faith. His love for the Lord and family were most important to him. He enjoyed spending time with family, attending his grandchildren’s activities, working in the yard on his Cub Cadet tractor, and good conversation. A service honoring Gene’s life will be held at 11:00 a.m. Monday, October 4, 2021, at First Presbyterian Church in Fort Dodge. Visitation will be held in the church Commons on Sunday, October 3, 2021, from 4:00 to 6:00 p.m. In lieu of flowers, memorials may be left to First Presbyterian Church. The family encourages the wearing of masks.

The family of Eugene Richard "Gene" Hayes created this Life Tributes page to make it easy to share your memories.

Gene Richard Hayes, of Fort Dodge, passed away peacefully at...

Send flowers to the Hayes family.