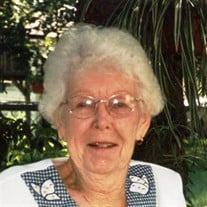 Evelyn H. Burleson, 106, died September 16, 2019, at Friendship Haven. She was born December 11, 1912, in Maddock, North Dakota to Nels O. and Ana Briesath Halverson, the fourth child in a family of ten. She graduated from Maddock High School in 1929. In 1931 she moved to Iowa City, Iowa where she was employed as a waitress and caregiver. While there she met Harold H. Burleson of Fort Dodge, a pharmacy student at The University of Iowa. They were married April 12, 1936, and established their home in Fort Dodge where he was a pharmacist. They had two children, Lon H. (Patricia) Burleson and Helen (Charles) Burleson Pollard. Evelyn was a homemaker. Harold Burleson died in April of 1971. In April of 1972 Evelyn became Executive Director for the Y.W.C.A., serving until April of 1980. There she worked with the Board of Directors revitalizing its purpose of housing women in need of shelter, the building, its programs for the community and was instrumental in establishing and restoring the acquisition of the historic Vincent House for public use. Evelyn was an 83 year member of First Presbyterian Church, where she served as one of the first women Elders, a Deacon, church school leader, women‘s association officer and group member. She chaired the 125th Anniversary celebration of the church in 1981, served on the Presbytery committees and continued as a steadfast member throughout her life. She enjoyed many hobbies, gardening in particular. She was a longtime member of the Y.W.C.A., Lauderdale Chapter of Questers, Chapter X TTT, the Fort Dodge Federated Garden Club, Tele-Care and longtime Hospice volunteer for Trinity Regional Hospital, and worked to establish the “Meet & Eat” program of Hospice where grieving widows and widowers and family members would share a potluck dinner and fellowship healing. She is survived by her son and wife, her daughter and husband, four grandsons and one granddaughter and five great-granddaughters. She loved her family and spent much time with them. She had a host of friends and thoroughly enjoyed them. She was particularly proud of her Norwegian heritage and was fluent in the language. She was preceded in death by her husband, Harold, a grandson, David Burleson, her parents, two brothers and six sisters. One sister, Velma Christensen of Havre, Montana, survives. Between 1971 and 1985 a highlight for her was a sister’s reunion at various times and places. In lieu of flowers, memorials are requested to Friendship Haven Memorial Foundation Trust Fund or First Presbyterian Scholarship Fund or Unity Point Hospice or the Y.W.C.A. A celebration of Evelyn’s life will be held at 9:30 a.m. on Saturday, October 5, at First Presbyterian Church, with the Rev. Sara Hill officiating. The family will greet friends at a reception immediately following the service. Arrangements have been entrusted to Gunderson Funeral Home & Cremation Services.

The family of Evelyn H. Burleson created this Life Tributes page to make it easy to share your memories.

Send flowers to the Burleson family.