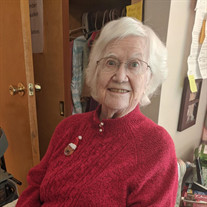 Evelyn Herman 88, died Tuesday, January 14, 2020 at Pleasant View Nursing Home, Albert City. Funeral Services will be at Fulton Lutheran Church, Roelyn, on Sunday, January 19 at 10:30 a.m. Visitation will be from 9:00 a.m. until the time of... View Obituary & Service Information

The family of Evelyn "Lynn" Herman created this Life Tributes page to make it easy to share your memories.

Send flowers to the Herman family.