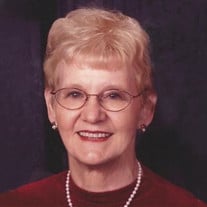 Florence Ida (Green) Buehler, 86, of Storm Lake, IA passed away on Friday, May 3, 2019 at the Methodist Manor Retirement Community. Plans for a service will be held at a later date. Florence was born to John and Thelma (Amsden) Green on August 2nd, 1932 on a farm near Rockwell City. Her family moved to Lohrville in 1936. She attended country school through 7th grade and then transferred to Lohrville Consolidated, graduating in 1950. Florence went on to attend the Iowa State Teacher’s College for two years and received an elementary teaching certificate. She later completed a MBA at Buena Vista University in 1964 and a MA from the University of South Dakota, Vermillion in 1968. Florence was united in marriage to William Charles Buehler on June 7th, 1953. They happily began life on the farm southwest of Storm Lake where they lived for the next 62 years. Florence spent her life teaching first graders for 43 years until retiring in 1995. She was privileged to have taught approximately 1,000 first graders by the time she retired and always called them “my kids”. She loved to cook and entertain and also liked to read and enjoyed music. Bill and Florence were Civic Center members for years and enjoyed numerous productions. They traveled to many places including Switzerland, Germany, Austria, Netherlands, England, Ireland, Wales, Tahiti, Bora Bora, Moorea and Rangoiroa, and as well as many islands in the Caribbean, New Zealand and Australia. After they retired, they took many trips throughout the U.S., Canada and Mexico. Florence was a member of the Storm Lake Methodist Church and PEO Chapter NM. Florence is survived by her in-laws Dale (Karen) Buehler of West Des Moines, IA, Mary (Melvin) Walton of Hutchinson, KS and Florence Desmond of Pomona, CA; Nieces, nephews, great-nieces, great-nephews, neighbors and friends. She was preceded in death by her husband Bill in 2011; her parents John and Thelma Green; her brother Lowell (Janice) Green; parents-in-law Vern and Inez Buehler, brother-in-law Don Friedrichsen; sister-in-law Marge Friedrichsen and great-nephew Lee Michael Powers.

Florence Ida (Green) Buehler, 86, of Storm Lake, IA passed away on Friday, May 3, 2019 at the Methodist Manor Retirement Community. Plans for a service will be held at a later date. Florence was born to John and Thelma (Amsden) Green on August... View Obituary & Service Information

The family of Florence Ida (Green) Buehler created this Life Tributes page to make it easy to share your memories.

Send flowers to the Buehler family.