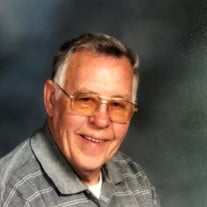 Franklin R. Lunn, 87, of Fort Dodge, died September 7, 2020 at his home in Fort Dodge in the care of UnityPoint Hospice. A service honoring Franklin’s life will be 10:30 a.m. Thursday, September 10, at the Gunderson Funeral Chapel. Interment will follow at Memorial Park Cemetery with military honors presented by V.F.W. Post No. 1856, and the Iowa Army National Guard. Visitation is Wednesday from 5 to 7 p.m. at Gunderson Funeral Home & Cremation Services. Memorials may be directed to the discretion of the family. Franklin Roosevelt Lunn, the son of Carl and Anna Lunn, was born in Swea City, Iowa, on November 8, 1932, and lived there until 3rd grade when he moved to Otho. He graduated from Otho High School in 1951. Franklin was united in marriage to Constance Jones on March 23, 1952, having started dating when in 9th grade. Franklin went into the United States Army in November 1952 and spent 16 months in Korea during the Korean War. He was trained in telephone installation and in maintenance. He served eight years in the Army Reserves. Franklin began work at the gypsum mills as a young boy, going to work with his father. He retired from Celotex Corporation after 40 years. He lived in Fort Dodge for two years after getting out of active duty and then moved to an acreage in Otho and lived there for over 20 years. Frank and Connie spent 18 years wintering at Circle T Park in Mission, Texas, where they had many friends. Franklin is survived by children, Jackie Craig, West Des Moines; Jody (Tim) Rogers, Cedar Falls; Jerry (Julie) Lunn, Twin Lakes; seven grandchildren and 15 great grandchildren; sisters, Shirley Zuspann and Sharon Deaton, and brother Jim (Patty) Lunn. He was preceded in death by his parents, his wife Connie on October 8, 2014, infant son Joseph, son-in-law Tim Craig, granddaughter Katie Lunn, and his siblings John Lunn, Harold Lunn and Voncile Grell.

Franklin R. Lunn, 87, of Fort Dodge, died September 7, 2020 at his home in Fort Dodge in the care of UnityPoint Hospice. A service honoring Franklin&#8217;s life will be 10:30 a.m. Thursday, September 10, at the Gunderson Funeral Chapel. Interment... View Obituary & Service Information

Send flowers to the Lunn family.