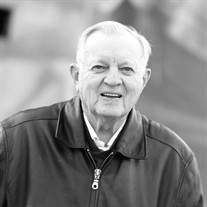 Walleyes in this area are safer today. Gary Carr, 88 of Fort Dodge, died peacefully at his home on Saturday, February 20th surrounded by family. Gary was born in Ames, Iowa on August 15,1932 and graduated from Ames High in 1950. He went on to serve 4 years in the Air Force during the Korean War. After an honorable discharge, he enrolled in Iowa State College. While at Iowa State, he was a member of the swimming team where he lettered. After graduating, he accepted a teaching/coaching position in the Fort Dodge Community School District. He taught ninth grade history and social studies for 32 years. During that time, he coached swimming/diving, football, and golf, as well as+ hosted a fishing club. He cheered for Phil Michelson, the Cyclones, Jeff Gordon, and was a long-suffering Minnesota Vikings fan. He retired in 1992. In his retirement years he gardened, fished, and played golf. He was a founding member of St. Olaf Lutheran Church’s “Oles”. He is survived by his wife of 55 years Karen, son Chad (Trisha) of Fort Dodge and daughter Stacey Carr (Dave Sick) of California and 3 grandchildren, Ashlyn Sick, Drayson Sick and Caden Carr, along with his brother Larry Carr of rural Wisconsin and sister Patsy Heady of Portland, OR. Survivors also included many friends, inlaws and former students he thought of as family. He was preceded in death by his parents, sisters Beverly and Nancy, and brother Bob along with the Little, Hydroelectric & REA dams where he caught the largest walleye of his life,10 lb/27 inch. He was known by many titles during his life: Mr. Carr, Coach Carr, husband, dad, uncle, brother, son, golf partner, WALIGUY (his license plate signified), Ole, fishing buddy, friend, and lastly garage sale Gary. He will be missed. Until then, as Gary would sign off, “tight lines!” A celebration of life will be at 1pm on Saturday, July 10, 2021 at St. Olaf Lutheran Church with Military Honors by the Air Force and VFW.

Walleyes in this area are safer today. Gary Carr, 88 of Fort Dodge, died peacefully at his home on Saturday, February 20th surrounded by family. Gary was born in Ames, Iowa on August 15,1932 and graduated from Ames High in 1950. He went on... View Obituary & Service Information

The family of Gary E. Carr created this Life Tributes page to make it easy to share your memories.

Walleyes in this area are safer today. Gary Carr, 88 of Fort...

Send flowers to the Carr family.