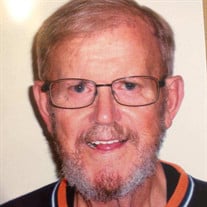 Gary Miller, 76, of Vincent, Iowa, passed away on Friday, December 20, 2019 at the Fort Dodge Health and Rehab. Services will be 10:00 AM on Tuesday, December 24, 2019, at the Gunderson Funeral Chapel in Fort Dodge. Burial will be in the Newark Cemetery rural Vincent. Visitation will be from 4:00 PM to 7:00 PM on Monday at the Gunderson Funeral Home and Cremation Services in Fort Dodge. Gary Paul Miller, the son of Marold and Pauline (Fisher) Miller, was born January 24, 1943 in Fort Dodge. Gary graduated from Eagle Grove High School in 1961 and then in 1962 he attended Fort Dodge Junior College, which became later Iowa Central Community College. After college in Fort Dodge Gary moved to Toledo, Ohio where he attended meat cutting school. On June 12, 1965 Gary was united in marriage to Diane Maly. Gary and Diane owned and operated the Vincent Locker from 1967 until their retirement in June of 2012. Gary served on the Vincent City Council and later held the office of mayor of Vincent. He was an EMT on Vincent Fire and Rescue Department and also served as a volunteer fireman from 1965 to 2017. Gary served as Fire Chief for Vincent Fire and Rescue Department from 1987 until 2017. He was a life Member of Sertoma International and a charter member of the Vincent Lions Club. Gary loved to fish, hunt and do woodworking. He was a member of South Enes Lutheran Church in Vincent. He is survived by his wife, Diane; their three sons, Heath (Kris) Miller of Vincent, Chaad (Julie) Miller of Emmetsburg and Gregg (Rachel) Miller of Fort Dodge; five grandchildren, Devin (Bryce) Olson of Eagle Grove, Lexie Miller of Eagle Grove, Lincoln Miller of Vincent, Jake Miller of Humboldt and Jordan Miller of Emmetsburg; and one great grandson, Cade Olson of Eagle Grove. He is also survived by his two brothers, Don (Bonnie) Miller of Fort Dodge and Dennis (Sharon) Miller of Vincent and many nieces and nephews. Gary was preceded in death by his parents, Marold and Pauline, his paternal grandparents, VG and Doris Miller, his maternal grandparents, Fred and Gertrude Fisher.

Gary Miller, 76, of Vincent, Iowa, passed away on Friday, December 20, 2019 at the Fort Dodge Health and Rehab. Services will be 10:00 AM on Tuesday, December 24, 2019, at the Gunderson Funeral Chapel in Fort Dodge. Burial will be in the Newark... View Obituary & Service Information

The family of Gary Miller created this Life Tributes page to make it easy to share your memories.

Gary Miller, 76, of Vincent, Iowa, passed away on Friday, December...

Send flowers to the Miller family.