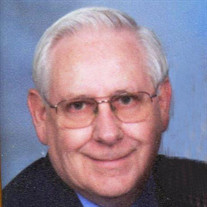 George R. Hazel, 88, of Wayzata, Minnesota, formerly of Fort Dodge, passed away Sunday, January 3, 2021, at Folkestone Assisted Living in Wayzata. Mass of the Christian Burial will be 10:00 a.m. Saturday, January 9, at Holy Trinity Church. Interment will follow in Corpus Christi Cemetery with military honors presented by V.F.W. Post No. 1856, and the Iowa Army National Guard. Visitation is Friday, January 8, from 5:00 to 7:00 p.m. at Gunderson Funeral Home & Cremation Services and then from 9:00 a.m. until service time on Saturday at the church. George, the son of Joseph and Isabelle (Kerkove) Hazel was born July 14, 1932 in Dunkerton, Iowa. He graduated from Dunkerton Community High School in 1950 and attended Gates Business College in Waterloo before being inducted into the US Army. After discharge from the Army, he was employed as a salesman for Pella Products Co. in Waterloo. On May 14, 1960 he was united in marriage to Mary Phyllis Bernard of Waterloo and they moved to Fort Dodge in 1966 to manage the Pella Window business which he eventually purchased. George was active as a member and past president of the Fort Dodge Home Builders Association, member and past president of the Fort Dodge Sertoma Club, past district governor of the West Iowa Sertoma District, 3rd degree member of the Knights of Columbus, and member of Holy Trinity Parish. He participated in the Polar Plunge for many years and was on the Honor Flight for Korean War Era Veterans. George loved to travel and was a devoted husband for 58 years. He brightened the lives of all that knew him with his quiet, sweet, and always happy demeanor. George is survived by his children, Todd of Bedford, Indiana; Sarah Doll of Plymouth, Minnesota; four grandchildren, Mary Hazel, McKenzie Staley, Justin and Ryan Doll; his sister, Jeanne (Frank) Alexander of Waterloo and brother Tim (Iris) Hazel of Fort Dodge. He was preceded in death by his parents, wife Phyllis, and brother Richard (Carol) Hazel of Raymond. Memorials may be directed to St. Edmond School Foundation or Holy Trinity Parish.

The family of George Richard Hazel created this Life Tributes page to make it easy to share your memories.

Send flowers to the Hazel family.