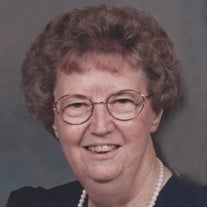 Georgia Jacobson, 92, of Fort Dodge, went home to be with her precious Lord on March 25, 2022. Services will be 10:30 a.m. Wednesday, March 30, at Northfield Church of Christ with Pastor Dale Harlow officiating. Visitation is Tuesday from 4:00 to 7:00 p.m. at Gunderson Funeral Home. Georgia, daughter of Evert and Mable Richardson, was born August 26, 1929, in Algona, Iowa. She graduated in Algona, then was a secretary for an attorney until she was married to Walter Jacobson June 8, 1946, in the Algona Baptist Church. They lived on a farm several years, then moved to Yellville, Arkansas where Walter was a Pastor and later went to be Pastor in Albuquerque, New Mexico, and California. Then they made the decision to moved back to Fort Dodge. Georgia worked for Northwest Iowa Toy for several years. She loved secretarial work and started to work for K-92 Gospel Radio Station. Later she worked as executive secretary for the telephone company until her department moved to Burnsville, NM. She was hired to work in the City Clerk’s Office, later years in the Public Works Department and then at Central Garage until she was 75 and then retired. She loved playing piano and organ and was pianist for church since a teenager, and also played organ for church. She was a Sunday school teacher many years. Her and her loving husband had 54 wonderful years of marriage when the Lord took Walter to Glory. They loved visiting care centers and the hospital and praying for the sick. Georgia continued doing that. They had a precious loving family who all loved and served the Lord too. They had a very special time of family togetherness. She loved traveling as a winter Texan to Pine to Palm Park in Weslaco, TX. She was an active member of Northfield Church of Christ. Georgia is survived by her children, daughters Linda Crouse (Rodney), of Donna, TX; Alberta Redman (Larry), of Fort Dodge; son Dan Jacobson (Judy), of Fort Dodge; seven grandchildren, Kevin and Kerry Crouse, Tammy Short (Daryl), Doug Read (Mindy), Brittany Kucnick (Paul Jr.), Mike Jacobson (Jessica), and Christy Buck (Chris); 24 great grandchildren, eight great-great grandchildren; and her sister Marilyn Richards. Preceding her in death was her precious sister Kathryn Snyder, brother Albert Richardson (Bettyanne), also her parents and grandparents, loving nieces, nephews, other relatives, and friends. Georgia will be remembered for her love in reaching out to others in need and taking time to encourage others. Memorials may be directed to the discretion of the family.

Georgia Jacobson, 92, of Fort Dodge, went home to be with her precious Lord on March 25, 2022. Services will be 10:30 a.m. Wednesday, March 30, at Northfield Church of Christ with Pastor Dale Harlow officiating. Visitation is Tuesday from... View Obituary & Service Information

The family of Georgia Mae Jacobson created this Life Tributes page to make it easy to share your memories.

Georgia Jacobson, 92, of Fort Dodge, went home to be with her...

Send flowers to the Jacobson family.