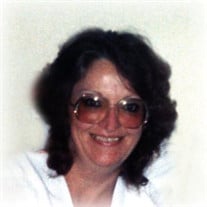 A Celebration Of Life for Gladys Trask, 71, of Humboldt, will be at 11:00 AM on Tuesday, October 29, 2019 at Our Saviour’s Lutheran Church in Humboldt. A time of gathering for family and friends will be from 10:00 AM until the time of service on Tuesday at Our Saviour’s Lutheran Church. Burial will at 2:00 PM on Tuesday at Rose Hill Cemetery in Eagle Grove, Iowa. The Gunderson Funeral Home and Cremation Services are in charge of arrangement. Gladys Mary Walters, the daughter of Orville and Kathryn (Skinner) Walters, was born June 15, 1948, in Fort Dodge and also attended school in Fort Dodge. She married Delbert Estlund and together they had two sons, Rick and David, the couple later divorced. On March 19, 1988, Gladys married Garry Trask. Together they made their home on a farm near Humboldt. This year they celebrated their 31st wedding anniversary. Gladys received her training as a CNA and worked as an In-Home Health Care Provider. Gladys enjoyed knitting hats for whoever needed one. She was a member of Our Saviour's Lutheran Church in Humboldt. Gladys passed away on Friday, October 25, 2019, at the Humboldt County Memorial Hospital in Humboldt. She is survived by her husband Garry; her two sons; Rick (Shelley) Estlund and David (Debbie) Estlund both of Fort Dodge; three grandchildren, Ashley Garret, Gabby Estland and Lexie Estlund; her three brothers, Ed (Pat) Walter of Des Moines, Bob (Carol) Walters of Fort Dodge and Gary Walters of Des Moines; a sister-in-law, Pam Walters of Camdenton, MO; two half brothers, Michael Walters and Matthew Walters of Fort Dodge; three step children, Lynda Warner of Sacramento, CA, Dean (Kristi) Trask of Spirit Lake and Dan (Diane) Gordon of Humboldt. She is preceded in death by her parents, and a brother Wally Walters.

A Celebration Of Life for Gladys Trask, 71, of Humboldt, will be at 11:00 AM on Tuesday, October 29, 2019 at Our Saviour&#8217;s Lutheran Church in Humboldt. A time of gathering for family and friends will be from 10:00 AM until the time of... View Obituary & Service Information

The family of Gladys Mary Trask created this Life Tributes page to make it easy to share your memories.

A Celebration Of Life for Gladys Trask, 71, of Humboldt, will...

Send flowers to the Trask family.