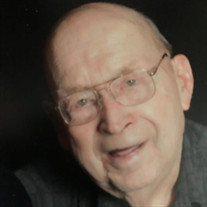 Glen Oren Thompson, 97, of Fort Dodge passed away on Wednesday, April 1, 2020 at Friendship Haven in Fort Dodge. A Celebration Of Life and Burial for Marjory, who passed away November 26, 2019, and Glen will be held 2pm Sunday, August 29, 2021 at Evergreen Cemetery in Vinton, IA. Arrangements have been entrusted to Gunderson Funeral Home and Cremation Services. Glen Thompson, the son of Oren C. and Mae (Rieke) Thompson, was born on August 18, 1922 near Vinton, IA. Glen Oren Thompson was united in marriage to Marjory Jean Crisman on August 29, 1943 in Van Horne, IA. They had been happily married for 76 years. Glen served 25 years as extension recreation specialist for the state of Iowa. Marjory and Glen volunteered full-time for the Heifer Project International for 12 years in Perryville, AR. Glen was very active at Friendship Haven, both in leadership roles and in the community. He was lovingly referred to as “the Mayor of Friendship Haven” by those who knew him and his involvement there. His favorite response to any question was, “Whatever…”, which was usually followed by a smile. He always had a ‘funny’ story to tell, whether you asked for one or not. Glen was a loving father, grandfather, and great-grandfather. Glen is survived by his children, Michael (Lee Bowman) Thompson, Beth Izold, and Gayle Reed; grandchildren, Michele McFarland, Eric (Amy) Thompson, Brian (Amanda) Reed, and Matthew (Maria) Reed; six great-grandchildren; one great-great-grandchild; sister-in-law, Kate Thompson; and many nieces and nephews. Glen was preceded in death by his parents, Oren and Mae Thompson; sons-in-law, Dick Izold and Jon Reed; and his siblings, Marlyn (Mary Jane) Thompson and Harold Thompson. In lieu of flowers, memorials may be directed to the Good Samaritan Fund at Friendship Haven. IN MEMORIUM Marjory Jean (Crisman) Thompson passed away on Nov. 26th, 2019 at Friendship Haven. She was the daughter of DeVere and Bertha (Pollack) Crisman, born on July 12, 1924. She was united in marriage to Glen Oren Thompson on August 29, 1943. Glen Oren Thompson passed away on April 1, 2020 at Friendship Haven. He was the oldest son of Oren C. and Mae (Ricke) Thompson. He was born on August 18th, 1922. His marriage to Marjory lasted for 76 years. These are the facts. But there is so much more about them that made them almost “forces of Nature” when it came to the influence they had on the family and friends that were around them. Their influence rested on a foundation of Faith in God and their fellow human beings; trust in the goodness of people; and a commitment to leave the world a better place. They were very active in the United Methodist Church with Marjory serving in a variety of positions in the EUB and United Methodist women’s groups. Her ability to organize and provide leadership in a variety of settings was amazing. Those ranged from the Athletic Dept. at the University of Iowa, the Dean of Students office at the Iowa State University; the administration of Heifer Project International to the Lord’s Cupboard in Ft. Dodge. She was her own person, loving and caring, but did not condone bad behavior or bad language. Her love of music and art, of being of service and helping others colored everything and every word she said and did. Glen joined her in these activities. He served the church in a variety of ways, but his contribution was more about making life fun! He was on the staff of the Iowa State Extension Service for 25 years. He always laughed that he got to get paid for playing games! Yet his contributions go far beyond calling Square Dances. He was heavily involved in the Rural Young People program; wrote the first national 4-H leadership development plan; helped create Hawkeye Recretory; was heavily involved in Heifer Project International; and was often referred to as the “Mayor of Friendship Haven”! Their 3 children: Mike (Lee Bowman), Beth Izold and Gayle Reed, grandchildren: Michele(Eddie McFarland), Eric(Amy), Brian(Amanda) Reed, Matt(Maria) Reed, grandchildren: Sarah, Sam, Darby, Bailey, Maxwell and Madeline and great, great grandchildren: Paul and Granger are joined by hundreds of friends around the world in honoring their work and their memory by keeping the values and faith that sustained them alive and well. We suspect that the following scenario might well have happened: On April 1, when Glen reached the Pearly Gates, St. Peter welcomed him with open arms and opened the gates wide. Marj was waiting for him, giving him a big hug, but also wondering why he took so long! Glen just grinned and rolled his eyes! Then she said, “Come on, I’ve picked out the perfect mansion for us. It is near my favorite hair solon and a wonderful golf course! To which Glen’s response was, “Whatever!” May they rest in peace! AMEN

Glen Oren Thompson, 97, of Fort Dodge passed away on Wednesday, April 1, 2020 at Friendship Haven in Fort Dodge. A Celebration Of Life and Burial for Marjory, who passed away November 26, 2019, and Glen will be held 2pm Sunday, August 29, 2021... View Obituary & Service Information

Glen Oren Thompson, 97, of Fort Dodge passed away on Wednesday,...

Send flowers to the Thompson family.