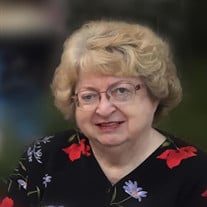 Gloria Lauinger of Aberdeen died on October 21, 2020 in Hospice care in Fort Dodge, IA with her two sons, Neil and Brett, at her side. Gloria Faye Arnold was born on September 9, 1940 to John Arnold and Margaret Huber at McIntosh, SD where she was raised. She attended Northern State College at Aberdeen, SD from 1958-60. She received a Bachelor of Arts in German from the University of Colorado in 1963. She traveled to 30 countries visiting the families of foreign students she worked with at the University. She studied advanced German in Vienna, Austria in 1962 and traveled in Europe under the People-to-People program. She studied at Georgetown University in 1966. She taught elementary school in McIntosh, SD from 1959-61, secondary German in Harrisburg, NE from 1963-66 and at Huron Senior High School from 1966-67. In December of 1967 she was married to Richard Lauinger at Kimball, NE. Their first home was in Rapid City and they then moved to Aberdeen in 1970. They opened their antiques business, Lauinger’s Country Store, in 1983 in the log cabin on 6th Avenue SW retiring in 2006. She was a member of Patience Circle at Zion Lutheran Church for 25 years, assisted her husband in running a Cub Scout pack at Zion from 1970-80, and helped Vietnamese and Cambodian refugees get settled in Aberdeen by teaching them English as a foreign language and driving them to the grocery store. She served on the board of directors of the National Depression Glass Association for 10 years traveling to various states for their annual convention and glass show. She wrote a monthly column for the association newsletter and was a contributing columnist for the Collector’s Journal in Vinton, IA. She is survived by her son Neil (Nancy) Lauinger, Thousand Oaks, CA; Son Brett (Anne) Lauinger, Fort Dodge, IA; grandchildren Shannon (Kristi) Lauinger, Fayetteville, NC; Brianne (Casey) Weiss, LaCrosse, WI; & Parker and Preston Lauinger, Thousand Oaks, CA. Her great grandchildren are Hailey, Anthony, and London Lauinger, Fayetteville, NC and Baron and Beau Weiss, LaCrosse, WI. She is survived by her siblings; Harold (Lois) Arnold, Wesley (Corrine) Arnold all of McIntosh, SD, Violet (Herbert) Geigle of Lemmon, SD and Esther (Clint) Mehl of Eagle, CO. Gloria was predeceased by her parents John and Margaret Arnold, and her husband Richard. A celebration of life and burial of cremains at Riverside Cemetery, Aberdeen, SD will be at a later date. Memorial gifts in memory of Gloria may be directed to Zion Lutheran Church, 1732 S. Main St, Aberdeen, SD.

Gloria Lauinger of Aberdeen died on October 21, 2020 in Hospice care in Fort Dodge, IA with her two sons, Neil and Brett, at her side. Gloria Faye Arnold was born on September 9, 1940 to John Arnold and Margaret Huber at McIntosh, SD where... View Obituary & Service Information

The family of Gloria Faye Lauinger created this Life Tributes page to make it easy to share your memories.

Send flowers to the Lauinger family.