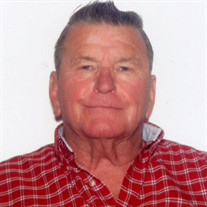 Gordon Allen Weber, age 79, passed away on Wednesday, November 24, 2021 at his home in Clare, Iowa. A gathering of family and friends will be held 4-6 p.m. Friday, December 3, 2021 at Gunderson Funeral Home and Cremation Services. A private burial with military honors will take place Friday. Gordon was an avid coin collector, enjoyed caring for the neighborhood animals, kept people laughing - or groaning - with his jokes, and was always on the move. He could be found having coffee in the mornings around Fort Dodge, playing the slots in Jefferson, or simply pushing a cart through Fareway or Target. Gordon was always present at family events - no matter how far away they were. Gordon put a lot of miles on his car with Lance riding shotgun. His devotion to his son was evident. Gordon was born on January 29, 1942 in Fort Dodge, Iowa. He proudly served in the United States Army. On June 3, 1967, Gordon was united in marriage to Debra Jane Hood in Manson, Iowa. He and Debra made their home in Clare and welcomed a son, Lance, in 1967. Gordon worked for Humbolt Sausage, IBP, and drove a transport vehicle for Boys Ranch; retirement was well deserved and enjoyed. Gordon is survived by his son, Lance Weber of Fort Dodge, IA; brothers Larry (Jan) Welter and Randy (Lori) Welter of Manson, IA; brother-in-law Tim (Phyllis) Hood of Oskaloosa, KS; other extended family members and friends. He was preceded in death by his parents Eileen and Lorence Welter; Allen and Helen Weber; his wife, Debbie; brother, Denny; and brother-in-law, Rick Hood.

Gordon Allen Weber, age 79, passed away on Wednesday, November 24, 2021 at his home in Clare, Iowa. A gathering of family and friends will be held 4-6 p.m. Friday, December 3, 2021 at Gunderson Funeral Home and Cremation Services. A private... View Obituary & Service Information

The family of Gordon Allen Weber created this Life Tributes page to make it easy to share your memories.

Send flowers to the Weber family.