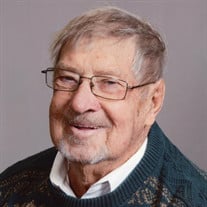 Jack Presler, 90, of Fort Dodge, died peacefully in his sleep January 8, 2021 at Friendship Haven. Memorial visitation (masks required) will be held from 4:00 p.m.- 7:00 p.m. Wednesday, January 13, 2021 at Gunderson Funeral Home & Cremation Services. Private family memorial service will be held and live streamed 10:00 a.m. Thursday at Grace Lutheran Church, where he was a longtime member. Interment will be held at North Lawn Cemetery at a later date. Jack Louis Presler, the son of Ben and Edna (May) Presler, was born August 12, 1930 in Duncombe, Iowa. He graduated from FDSH in 1949. On September 13, 1953, Jack married Virginia Kunde after a courtship that began after spotting her at a New Year's Eve party. He was a loyal and devoted husband to her until her death and after she died, he would often say he needed to go to Minnesota where her ashes were laid to "talk to your ma." Jack began work at National Gypsum when he was a young man, starting in the lowliest of positions, but moved through the ranks over the years to eventually becoming a plant manager in Rotan, TX, before he retired after 42 years. After retirement, he accepted a contractor role for the company overseeing the build of a new plant in Israel. Providing for a family of 10 children meant that he worked tirelessly. When he came home at the end of the day from work at the plant, his work continued into the evening at the acreage he lived at for 60 years. His chores at home were constant, raising livestock and tending the fields that nourished them. When the phone rang for him after 5 p.m. or when supper was ready, one of his kids had the task to go let him know, which involved finding him outside in the middle of whatever he was busy with, often standing at the edge of the field waving their arms and yelling until he saw he was needed in the house. Jack had a green thumb when it came to planting vegetables and fruit trees and kept a huge garden all his life. He raised his family organically before it was fashionable to do so. When he wasn't working, he enjoyed hunting, fishing and golfing, walking the nature trail when he was able, attending men's prayer group at Grace, reading, enjoying a glass of Scotch and, at the end of his life, he loved watching the birds in his backyard. He enjoyed visiting Minnesota where he had property on the land Virginia was raised and when his children were young, vacations involved a very, very large tent. His greatest joy in life were his children, grandchildren, great-grandchildren and great-great grandchildren. His entire adult life, where he was, a child was either on his lap or nearby. He loved to tease them with whisker rubs, the buzzer and patty cake (where they always seemed to miss their hands clapping together.) His eyes always sparkled with joy and love in their presence. He was happiest being with his family and was so proud of his ever-expanding brood. He sacrificed material belongings so that he would be able to leave something for his children, going so far as to wear an old coat with holes in it, just so that he didn't spend any money on himself. A child of the depression years, his values of frugalness and saving only applied to himself. He would, and did, give his family anything they needed and continued that selflessness to the very end, only asking about their lives and how they were doing and asking if they needed anything, yet disregarding or downplaying his own pain, needs and feelings. To everyone who knew him, there are not enough words in the dictionary to describe his unfailing generosity, kindness, caring and love. He was a protector and provider to his family his entire life and was as selfless a human as there ever could be. He was our greatest joy and therefore his loss will be our greatest pain. Jack is survived by his children; Karla Presler of Decorah, IA, Mark (Kasamon) Presler of International Falls, MN, Maetha (Swede) Passow of Fort Dodge, Alisa Johnson of Fort Dodge, John Presler of Fort Dodge, Andrea Presler of Roslyn, WA, Joella Steffenson of Clarion, IA, Tanya (Shane) Harrison of Fort Dodge and Amy Presler of Fort Dodge, son-in-law Dale Baker; 24 grandchildren, 26 great-grandchildren and 3 great-great grandchildren; brother Bob Presler and sister Sandra (Chuck) Peterson. He was preceded in death by his wife of 59 years Virginia, daughter Sharla Baker, son-in-law Art Hoppen, grandson Richard A. Smith Jr., siblings Dorothy Russell, Helen Fishel, Dwayne Presler, sister-in-law Vicki Presler and brothers-in-law Wesley Fischel and Robert Russell.

The family of Jack Presler created this Life Tributes page to make it easy to share your memories.

Jack Presler, 90, of Fort Dodge, died peacefully in his sleep...

Send flowers to the Presler family.