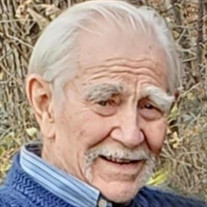 Erling Jacob “Jake” Bligard, 95, of Fort Dodge, Iowa, died at his home at Friendship Haven on April 13, 2022. Graveside services will be held at St. Olaf Cemetery in Fort Dodge at 10:00 am Saturday, April 16, 2022. A Celebration of Life service will be held at 10:00 am Monday April 25, 2022 at the Tompkins Celebration Center at Friendship Haven. Gunderson Funeral Home and Cremation Services is entrusted with the arrangements. Jake Bligard, the son of Oluf and Anna (Smith) Bligard, was born in Minneapolis, MN, on April 25, 1926. He was an Eagle Scout and served in the US Navy during World War II while earning his Masters degree in Mechanical Engineering at the University of Wisconsin Madison. He later worked there as an Engineering instructor until 1950. He was instrumental in the design of the first Boeing commercial jet airplane, the 707, and later was responsible for the design and development of the Tomahawk cruise missile defense system for the US military. In addition, he has multiple Engineering patents. On July 8, 1950 Jake was united in marriage to Inez Hefty, his wife of 71 years. In addition to Inez he is survived by his son Dr. Eric Bligard of Fort Dodge and daughter Dr. Karen (Bligard) Rodden of New Hampshire. His grandchildren include Dr. Gregory Bligard, Richard Bligard, Grace Rodden, esq., Kathryn Walker, Patrick Rodden, and Daniel Rodden. Great grandchildren include Andrew Bligard and Olin Walker. He is also survived by his sister Elinor Colebank of Bloomington, MN.

The family of Jake Bligard created this Life Tributes page to make it easy to share your memories.

Send flowers to the Bligard family.