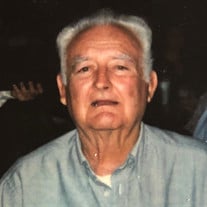 James “Sid” Dougherty, 86, of San Antonio, Texas, formerly of Fort Dodge, died August 24, 2020 at the Vitas Hospice in San Antonio. A rosary prayer service and visitation will be held 9:00 a.m. Tuesday, September 8, 2020 at Gunderson Funeral Home. Mass of Christian Burial will be held 11:00 a.m. Tuesday at Corpus Christi Church followed by committal in Corpus Christi Cemetery. James Sidney Dougherty, the son of Samuel and Julia Nora (Carroll) Dougherty, was born March 26, 1934 in San Antonio, TX. He was united in marriage to Barbara Ann Jennings in 1956. He was a devoted husband, father, grandfather. He will be remembered for his faith and teaching his children courage, strength, humor, and confidence. Survivors include his children Dorothy Docherty, Mary Ellen Burke, Nora Herrin, Andy Dougherty; 11 grandchildren and 22 great grandchildren; 2 sisters and many cousins, nieces, nephews and friends. He was preceded in death by his wife, his parents, and sons James Sidney and Samuel Paul.

The family of James Sidney Dougherty created this Life Tributes page to make it easy to share your memories.

Send flowers to the Dougherty family.