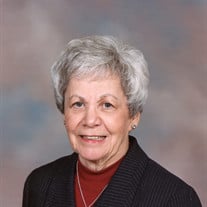 Jane Ann Davies, 89, died Sept. 3, 2019, at Friendship Haven, Fort Dodge, Iowa. Services will be held at 10:30 a.m. Friday, Sept. 6, at the Tompkins Celebration Center, Friendship Haven, with the Rev. Sara Hill officiating. Burial will be in the Masonic Cemetery, Des Moines. Gunderson Funeral Home is in charge of arrangements. Jane is survived by daughters Nancy Holsapple, West Des Moines, and Kathy (Brent) Taylor, Fort Dodge; grandchildren Michelle (Jason) Lewis; Leslie (Curt) Irlbeck; Gregory (Crystal) Holsapple; Daniel (Anna) Taylor; David (Cayla) Taylor; Erin (Shawn) Handeland; and Anna Taylor; and nine great-grandchildren. She was preceded in death by her husband, Donald; her parents, Percy and Helen (Lenker) Greenawalt; and her brother, James Greenawalt. Jane was born Oct. 14, 1929, in Des Moines. She attended Des Moines Public Schools, graduating from Roosevelt High School in 1947. Her father, a pharmacist, owned Greenawalt Drug Store, 5th and Grand, downtown Des Moines, and Jane helped out at the store while she was growing up. She was a member of Chi Omega sorority at Drake University, where she graduated in 1951 with a Bachelor of Science in business administration. Jane then took a job in the business department of The Des Moines Register and Tribune. On Oct. 18, 1952, Jane married Donald A. Davies at Central Presbyterian Church, Des Moines. The couple moved briefly to Spencer, Iowa, and then back to Des Moines, where daughters Nancy and Kathy were born. Donn’s career as a sales representative moved the family to Naperville, Ill., and then to Bettendorf, Iowa, in 1966. Jane was a compassionate, sensitive and loving wife, mother, sister, daughter and grandmother. She cared about children and helping others. A homemaker for much of her married life, she worked part-time during the 1970s as a teacher associate in the kindergarten classroom at Hoover Elementary, Bettendorf. Jane volunteered with Meals on Wheels and the Genesis Hospital Auxiliary, and served as a Camp Fire Girls leader. She was a member of Bettendorf Presbyterian Church, Order of the Eastern Star, T.T.T. Society, Davenport Gyrettes and P.E.O. Jane was an excellent seamstress and proficient bridge player. She and Donn loved to travel; they visited many European countries and played golf in South Padre Island, Texas, for several winters. Donn died March 16, 2000. Jane moved to Des Moines in 2004 and then to Friendship Haven, Fort Dodge, in 2008. She was a member of First Presbyterian Church, Fort Dodge. Memorials may be left to the Friendship Haven Good Samaritan Fund.

The family of Jane A. (Greenawalt) Davies created this Life Tributes page to make it easy to share your memories.

Send flowers to the Davies family.