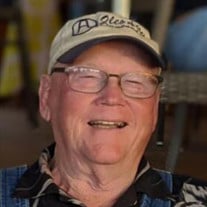 James A. Spike, 80, of Duncombe, died peacefully at the Paula J. Baber Hospice Home on November 14, 2020, following a courageous 25 year battle with cancer. Visitation will be held from 10:00 a.m. – 1:00 p.m. Saturday, November 28 at Gunderson Funeral Home & Cremation Services. Funeral will follow at 1:30 p.m. at the Gunderson Funeral Chapel with burial at Washington Township Cemetery, Duncombe. Please note, as Jim requested, no need to dress up for this occasion. James Arnold Spike, the son of Glen and Thelma (Crouse) Spike, was born June 12, 1940. He attended country school at Evanston, graduated from Fort Dodge Senior High in 1958 and attended ICCC. Along with his father, Jim owned and operated Spike Elevator. He later worked for Van Diest Supply for 26 ½ years, retiring in 2007. On May 29, 1963 he was united in marriage to Phyllis DeFoe and to this union, 3 daughters were born. They were later divorced. On July 12, 2008, Jim married Mary Knudson in Evanston surrounded by family and friends. He lived his entire life in Evanston, IA. Jim “never met a man he didn’t like.” His strong devotion to his family, love of his home, community and his thoughtful, considerate gestures of giving homemade bread to friends left smiles on many faces. Those to cherish his memory are his wife Mary; his daughters Michelle (Kelly) Grossnickle of Manson, Stacey (John) Heiter of Ankeny, Kimberly (Frank) Bloom of Fort Dodge, step-daughters Rayne Knudson of San Jose, CA, Kiersten (Eric) Quisling of Kanawha, and Jaeme (Riley) Bedford of Webster City; 21 grandchildren and 14 great grandchildren. He was preceded in death by his parents and infant sister. A celebration of life will be planned in June. Memorials may be left to the discretion of the family.

The family of Jim Spike created this Life Tributes page to make it easy to share your memories.

James A. Spike, 80, of Duncombe, died peacefully at the Paula...

Send flowers to the Spike family.