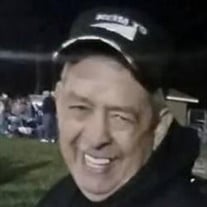 John Richard Mead “Bubba” 69, of Fort Dodge passed away on Sunday, August 22nd, 2021, at the Paula J. Baber Hospice Home in Fort Dodge surrounded by his family. A Celebration of Life for John will be held on Saturday, August 28th, 2021, at 10:00 a.m. at the Gunderson Funeral Chapel in Fort Dodge with military honors conducted by the VFW Post #1856 and the Iowa Army National Guard. John was born in Cambridge, Ohio to Donald Richard Mead and Gloria Maxine (Cowgill) Mead on July 7th, 1952. He attended school in Cambridge, Ohio. He entered the United States Army in 1971 through 1974 in active duty. In that time, he served in the Vietnam War from 1972-1973, where he was an aircraft mechanic for the 82nd Airborne. He returned home to Ohio in 1974 and was honorably discharged from the Army in 1977. In late 1975 John moved to Eagle Grove, Iowa where he began his truck driving career. John worked for various trucking companies including Ackley Foods, Ellsworth Trucking, Smithway Motor Express where he was an owner operator for several years and finally retired from O’Berg Trucking. In 1981, he was united in marriage to Darice Woods in Iowa Falls they later divorced. Survivors include his daughter Twyla (Mike) Mead of Fort Dodge, Iowa, and their sons Dillon Mead (Jazzmin and Lydia Hughes) Devon Mead (Rheanna Arbegast) both of Fort Dodge, Iowa, Son Travis Mead of Fort Dodge, Iowa and his girls Lilly Mead and Evy Mead of Jefferson, Iowa, Tonya Woods (Wayne Reed) of Reno, Nevada and her daughters Ivy McNamar of Mason City, Iowa and Madison McNamar of Reno, Nevada. Richard (Brandy) Dodd of New Concord, Ohio, and their son Braxton. His sister Sharon Jackson of Belle Valley, Ohio, Brother Keith (Trale) Mead of Marion, Arkansas, Sister Kimberly (John) Bohley of Monroe, Ohio, Brother Jim (Jackie) Mead of Cambridge, Ohio, June Mead of Dayton, Ohio, and Tom Mead of Monroe, Ohio. A host of nieces and nephews that he loved dearly. And his most beloved pet Gracie Mae Mead. John was preceded in death by his parents Donald and Gloria Mead, his maternal and paternal grandparents, brother Donnie Mead, and son John Richard Mead II. He is also preceded in death by his brother-in-law Dave Jackson and nephew John David Jackson. John was an avid Green Bay Packer, Ohio State Buckeye, and ISU fan and loved watching NASCAR. He loved camping and spending time with his family, most often watching dirt track racing. One thing that he took great pride in is being the best Pop Pop to all his grandchildren, which they all love him dearly. John loved spending his mornings at the mall walking and drinking coffee with all his coffee friends. John always had a smile on his face and could bring a smile to everyone he would meet. He loved to joke around and tell the most outlandish stories that sometimes made you think they were true. John will greatly be missed by his family and friends.

John Richard Mead &#8220;Bubba&#8221; 69, of Fort Dodge passed away on Sunday, August 22nd, 2021, at the Paula J. Baber Hospice Home in Fort Dodge surrounded by his family. A Celebration of Life for John will be held on Saturday, August 28th,... View Obituary & Service Information

The family of John Richard Mead created this Life Tributes page to make it easy to share your memories.

Send flowers to the Mead family.