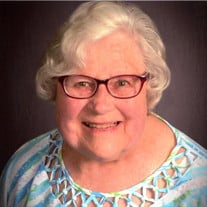 Joyce R. Gadbury, 96, of Knierim, Iowa, passed away Tuesday, January 12, 2021, at her home, in the presence of her children. She is survived by her children, Donna Pinczkowski, Milwaukee, WI; Janna (James) Graham, Webster City, IA; Allan (Janet) Gadbury, Otho, IA; Lyle (Kathi) Gadbury, Cheyenne, WY; Carol Heinlen, Rockwell City, IA; and Karen (Mike) Reed, Hales Corners, WI; 25 grandchildren 57 great grandchildren and 14 great-great grandchildren. She was preceded in death by her husband Jack in 1990, her daughter Sharon in 2013, her daughter Georgia in 2020, her grandson Brian in 2020, her granddaughter Brianne Gumm in 2017, her sons-in-law, Daniel Gumm in 2016 and Robert Stuart in 2014, her brother Elmer Akselsen in 2001, her mother Eda Halverson in 1991, and her father Geofred Akselsen in 1940. Joyce Akselsen was born April 21, 1924 in Fort Dodge. to Eda and George Akselsen and graduated from Fort Dodge High School in 1942. She married Donald Jack Gadbury January 6, 1946. Together they farmed for 10 years near Somers and then moved to Knierim where she has resided for 64 years, until her passing. She was the Knierim City Clerk from September 1980 to December 31, 2013. A service honoring Joyce’s life will be 12:00 p.m. Saturday, January 16, at First Covenant Church 201 Ave. H Fort Dodge, IA, with Pastor Allan Redenius officiating. Interment will follow at Greenfield Township Cemetery at Knierim, IA. Visitation is 10:00 to 11:45 a.m. Saturday at First Covenant Church. Arrangements have been entrusted to Gunderson Funeral Home & Cremation Services.

The family of Joyce R. Gadbury created this Life Tributes page to make it easy to share your memories.

Send flowers to the Gadbury family.